The decision by the U.S. Supreme Court that there’s no constitutional right to abortion will radically change the reproductive health landscape in Texas.

The state’s Republican leadership has long sought to ban abortions, but Roe v. Wade has kept lawmakers from doing so. With that 49-year-old case now overturned, a trigger law will go into effect in the coming weeks that bans all abortions from the moment of fertilization, except in rare cases to save the life of a pregnant patient or prevent “substantial impairment of major bodily function.”

The Texas Tribune has been covering the fight over abortion rights for years. Here’s what you need to know about the ruling and how it will affect Texans.

Abortions up to about six weeks in pregnancy can resume at some clinics in Texas for now after a Harris County District Court judge granted a temporary restraining order Tuesday that blocks an abortion ban that was in place before Roe v. Wade.

“It is a relief that this Texas state court acted so quickly to block this deeply harmful abortion ban,” Marc Hearron, senior counsel at the Center for Reproductive Rights, said in a press release. “This decision will allow abortion services to resume at many clinics across the state, connecting Texans to the essential health care they need. Every hour that abortion is accessible in Texas is a victory.”

A hearing has been set for July 12 to decide on a more permanent restraining order.

However, Tuesday’s ruling is only a stopgap measure that, at most, will extend abortion access in the state for two months.

Paul Linton, an attorney for the anti-abortion group Texas Alliance for Life, said he thought a higher court would soon vacate the temporary restraining order and that the pre-Roe abortion ban should stand.

“I don’t think it has any merit,” Linton said. “I don’t think there’s any plausible argument that the laws have been expressly repealed, and the repeal-by-implication argument, I think, is very weak.”

A group of abortion providers filed a lawsuit Monday to prevent an old abortion ban, which predates Roe v. Wade, from being enforced before a trigger law banning most abortions in the state goes into effect.

If you or someone you know has been sexually assaulted, you can receive confidential help by calling the Rape, Abuse & Incest National Network’s 24/7 toll-free support line at 800-656-4673 or visiting its online hotline. You can also reach a trained crisis counselor through the National Suicide Prevention Lifeline by calling 800-273-8255 or texting 741741.

Abusive partners often tightly control a victim’s reproductive choices by restricting the use of contraception or even engaging in sexual assault. Once they’re pregnant, a victim is at much higher risk of violence. Women who are pregnant or recently gave birth are twice as likely to die by homicide than any other cause of maternal mortality, most often at the hands of an intimate partner.

For those who have been able to access it, abortion, advocates say, has represented a lifeline — and often the safest option — for many experiencing intimate partner violence.

But now, the U.S. Supreme Court has overturned Roe v. Wade, clearing the way for Texas to ban abortion in nearly all cases. Domestic violence victims are among the least likely to be able to travel out of state or safely self-manage a medication abortion at home, leaving them no choice but to carry a pregnancy to term. The state’s abortion ban does not have exceptions for rape or incest.

Texans who want to access abortion at any stage of pregnancy will have to travel over state lines, look beyond the U.S.-Mexico border or operate outside of the law, while others will carry unwanted pregnancies to term.

All of Texas’ neighboring states — except New Mexico — are expected to ban abortion to varying degrees. New Mexico is expected to become a “haven state,” where abortion remains legal and largely accessible. That state currently has six abortion clinics and is gearing up for an influx of patients. Jackson Women’s Health Organization, the Mississippi abortion clinic at the center of the Supreme Court case, has said it’s relocating to New Mexico.

But even the closest New Mexico clinic is a 10-hour drive from Dallas and 12 hours from Houston — Texas’ two largest population centers. Abortion advocates are creating networks and strengthening existing ones to help people travel to states that allow abortion. But that’s not an option for everyone. Neesha Davé, deputy director at Lilith Fund, an Austin-based abortion fund, said the impact of these abortion laws will not be felt equally by all.

“Folks who have resources, folks who are wealthy, will always be able to access the care they need, even if they have to navigate countless barriers to be able to do so,” Davé told The Texas Tribune in May. “But it is lower-income folks, people of color, the folks that we are serving on our hotline who are disproportionately impacted by abortion bans.”

Birth control and emergency contraceptives, commonly referred to as Plan B, are different from the drugs used to induce an abortion.

In the same decision that overruled Roe v. Wade, the U.S. Supreme Court was clear that the constitutional right to access contraceptives remains untouched — though one justice said he would welcome challenges to that right.

The 1965 Supreme Court case Griswold v. Connecticut established that married couples have a right to purchase and use contraception. In 1972, the court confirmed in Eisenstadt v. Baird that the right extends to unmarried individuals as well.

In Griswold, the court ruled that the U.S. Constitution guarantees a right to privacy, with some justices saying it was implied throughout the Bill of Rights and some arguing it comes directly from the due process clause of the 14th Amendment.

Texas Republican leaders celebrated the overturning of Roe v. Wade on Friday as Democrats vowed to fight back at the ballot box.

Attorney General Ken Paxton declared on Twitter that abortion is “now illegal in Texas” and said he would be closing his office and “making it an annual holiday.” U.S. Sen. Ted Cruz said the reversal of Roe v. Wade is “nothing short of a massive victory for life, and it will save the lives of millions of innocent babies.” And Texas GOP Chair Matt Rinaldi called it a “historic day which Republicans and Pro-Life advocates have waited for a generation.”

Democrats were livid — and acknowledged their best bet to restore abortion access in Texas is to beat Republicans in November.

“The only way to overcome today’s decision is to win this race for governor,” Beto O’Rourke, the Democratic nominee for governor, said in a statement.

Abortions in Texas have ceased following a Supreme Court ruling that eliminated the constitutional protection for an abortion and ensuing legal uncertainty, Whole Woman’s Health and Planned Parenthood Texas said.

The U.S. Supreme Court on Friday ruled to overturn Roe v. Wade, allowing states to set their own laws regulating abortion procedures. Texas has a “trigger law” in place that will ban all abortions from the moment of fertilization starting 30 days after the Supreme Court’s judgement, which is typically issued about a month after the initial opinion.

But clinics and abortion funds are ceasing services now because the attorney general of Texas and some anti-abortion activists are arguing that state laws that banned abortion before Roe v. Wade — and were never repealed — could now be in effect in Texas.

Texas organizations have played an outsized role in bringing the national anti-abortion movement to this critical juncture — but the old guard and new leaders do not always agree on methods.

New state abortion restrictions, including Senate Bill 8, have made pregnancy care more challenging than ever, providers say. They worry that a total ban will make it worse.

Advocates and experts also warn that the state isn’t prepared to support an increase in need for low-income mothers and children. Pregnant women in Texas are more likely to be uninsured and less likely to seek early prenatal care than the rest of the country. They’ll give birth in one of the worst states for maternal mortality and morbidity. Teens are already more likely to give birth more than once here than in any other state. And low-income new parents will be kicked off of Medicaid sooner than in many other states.

“When you say ‘social safety net’ in Texas, it sounds like a joke,” said D’Andra Willis of the Afiya Center, a North Texas reproductive justice group. “Everything they could have set up or increased to protect people if they really cared, they’re not doing it here.”

Cheap regulated and unregulated medication is available over the counter at Mexican pharmacies, just a short walk away on the other side of the border. Rio Grande Valley residents and people from all corners of the state often cross into Mexico to get dental work or stock up on anything from daily vitamins and epinephrine to Valium and Xanax.

And then there’s misoprostol, a medication taken orally to prevent stomach ulcers — or terminate pregnancies.

Texas regulates abortion-inducing drugs like misoprostol more strictly than federal regulations require; they can be prescribed and dispensed only in person by a doctor through the first seven weeks of pregnancy.

Just over the border, though, it’s a different story.

Reproductive rights advocates expect to see more Texans traveling to Mexico to get abortion-inducing drugs they can’t obtain legally at home. The Tribune spoke with one person who did earlier this year.

The end of Roe v. Wade could turn district attorneys’ offices into the next abortion battlegrounds. Five Texas district attorneys — from Dallas, Travis, Bexar, Nueces and Fort Bend counties — have publicly promised that they will not pursue abortion-related criminal charges if Roe v. Wade is overturned. Others are expected to quietly decline to take these cases.

In other jurisdictions, though, district attorneys may take an opposite approach, either due to personal anti-abortion leanings or political pressure. Earlier this year, a woman in Starr County was charged with murder after a “self-induced abortion.” Advocates worry other cases could pop up, even though Texas’ trigger law prohibits prosecution of the person who got the abortion. And a state representative has promised to author a bill that would allow district attorneys to prosecute cases outside their counties.

Last year, the Texas Legislature passed a law, Senate Bill 8, that banned the procedure at around the sixth week of pregnancy. The law used a unique enforcement mechanism that relied on private citizens to enforce it, since Roe v. Wade was still in effect when it passed.

When the law went into effect, abortions plummeted by half.

Around 50,000 to 55,000 Texans obtained abortions each year from 2014-21. Before that, more than 60,000 abortions were obtained yearly. These totals account only for abortions performed legally in Texas and don’t include people who went out of state or obtained abortion-inducing medication without a prescription.

The law would make an exception only to save the life of the pregnant patient or if they risk “substantial impairment of major bodily function.” Doctors could face life in prison and fines up to $100,000 if they perform abortions in violation of the law. People who had abortions would not be prosecuted under the law.

Get the data and visuals that accompany this story →

Disclosure: Planned Parenthood and Afiya Center have been financial supporters of The Texas Tribune, a nonprofit, nonpartisan news organization that is funded in part by donations from members, foundations and corporate sponsors. Financial supporters play no role in the Tribune's journalism. Find a complete list of them here.

This article originally appeared in The Texas Tribune at https://www.texastribune.org/2022/06/24/texas-abortion-law-supreme-court-ruling/. 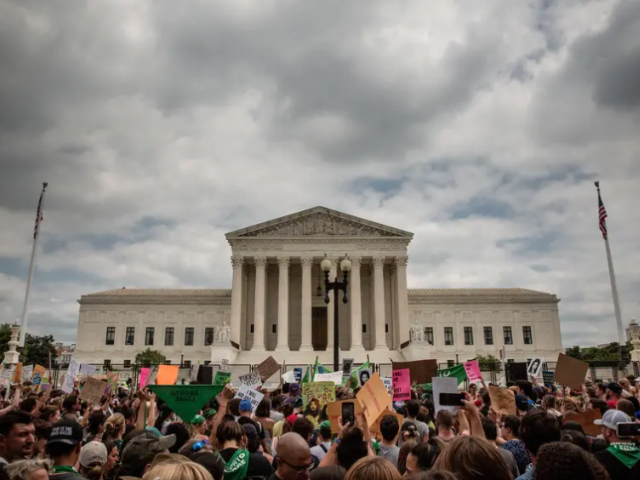