By Stephen Neukam, The Texas Tribune

WASHINGTON, D.C. — Mayor Muriel Bowser has declared a public health emergency in response to Texas continuing to bus migrants to the nation’s capital.

Bowser, who has been locked in a public feud with Gov. Greg Abbott over his policy, announced the city would spend an initial $10 million to create an office to help coordinate the arrival of migrants, offering them support when they arrive.

“It will help us tailor our needs for migrants to provide reception services, respite services, meals, transportation, urgent medical needs, transportation to connect people to resettlement services and the like,” Bowser said at a news conference announcing the move Thursday.

The voluntary busing policy, part of the governor’s Operation Lone Star initiative to address the large number of migrants arriving at the Texas-Mexico border, began as a way of antagonizing the Biden administration over its border policies. The first buses arrived in D.C. in April, and since then Abbott has sent over 7,900 migrants to the capital. He has also sent migrants to New York City and Chicago. Arizona has also bused migrants to D.C.

Leaders of those cities have complained that the busing is overwhelming their city services, particularly because Texas is not coordinating with them or giving them advance notice of when buses will arrive. Advocates and aid workers who support migrants along the border, meanwhile, have said that Abbott is actually providing people a useful service by offering them free and safe transportation to their final destinations.

Bowser said the city will seek reimbursement from the federal government for its new migrant program. Abbott has criticized the city mayors for seeking federal help.

His office unleashed a searing criticism of Bowser and the Biden administration after the announcement, labeling the mayor “an absolute hypocrite.”

“The true emergency is on our nation’s southern border—not in our nation’s capital—where small Texas border towns are overrun and overwhelmed by hundreds of migrants every single day as the Biden Administration dumps them in their communities,” Abbott’s press secretary Renae Eze said in a statement to The Texas Tribune. “Instead of fearmongering and complaining about a few thousand migrants in her sanctuary city, Mayor Bowser should call on President Biden to do his job and secure the border—something the President continues failing to do.”

Bowser’s new initiative will seek to bridge what experts have said is a dangerous gap in coordination in Abbott’s program.

“There’s no actual thought about how can we have a coordinated response about how to deal with migrants coming to our borders that’s in line with federal policy or work with other cities and federal agencies to ensure that our process is humane,” Edna Yang, co-executive director of American Getaways, a Texas immigrant advocacy group, said.

The full program is now LIVE for the 2022 Texas Tribune Festival, happening Sept. 22-24 in Austin. Explore the schedule of 100+ mind-expanding conversations coming to TribFest, including the inside track on the 2022 elections and the 2023 legislative session, the state of public and higher ed at this stage in the pandemic, why Texas suburbs are booming, why broadband access matters, the legacy of slavery, what really happened in Uvalde and so much more. See the program.

This article originally appeared in The Texas Tribune at https://www.texastribune.org/2022/09/09/texas-busing-migrants-dc-emergency/. 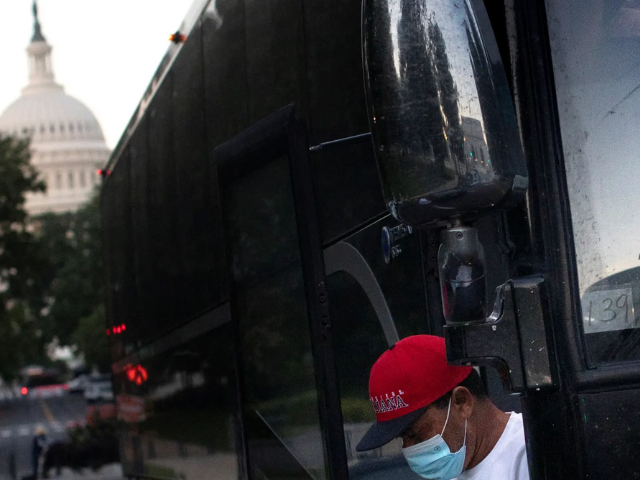