"Texas Democrats fume over national counterparts for insufficient support in South Texas battleground" was first published by The Texas Tribune, a nonprofit, nonpartisan media organization that informs Texans — and engages with them — about public policy, politics, government and statewide issues.

Some prominent Texas Democrats are up in arms at what they see as a withdrawal of serious national investment in a South Texas congressional district that is the linchpin of Republicans’ drive to take over the region.

With less than a month to go, neither the Democratic Congressional Campaign Committee nor the House Majority PAC, the top Democratic super PAC in House races, has gone on the air in the 15th Congressional District, where Michelle Vallejo is the Democratic nominee. And on Sunday, Axios reported that House Majority PAC is “planning to cancel the scheduled ad reservations for her at the end of the month, according to a source familiar with the group’s plans.”

That was the breaking point.

“I’m really, deeply disappointed in the DCCC,” Texas Democratic Party Chair Gilberto Hinojosa said in an interview the next day. “I hope they change their mind, and if we lose this election, it’s completely on them.”

The state party followed up with a memo saying how it was “doubling down” on South Texas, including by sending “staff across departments to the Rio Grande Valley to assist campaigns on the ground with organizing digital, communications, fundraising, and other efforts.”

House Majority PAC declined to comment on the in-state criticism, and the DCCC disputed the suggestion that it was not contesting the 15th District. The committee opened an office there this spring, has multiple staffers on the ground, and has run digital and radio ads.

“The DCCC has invested considerable resources to win all three South Texas races, and our commitment has not changed,” DCCC spokesperson Helen Kalla said in a statement. “We’re excited that our partners will be joining us for the final stretch and we’re ready to win these races together.”

The 15th Congressional District is home to an open seat after its incumbent, Rep. Vicente Gonzalez, D-McAllen, decided to seek reelection in a safer neighboring district due to redistricting. The Republican nominee for the 15th District is Monica De La Cruz, who gave Gonzalez a surprisingly close race in 2020, and the Democratic nominee is Vallejo, a progressive who narrowly won a primary runoff in May against a more moderate opponent.

Redistricting made the 15th District more favorable for the GOP — but not out of reach for Democrats.

Since Labor Day, Republican outside groups have flooded the district with TV ads assailing Vallejo as too liberal for South Texas. Third-party Democratic outfits have not mounted any serious counteroffensive on the air. Vallejo’s campaign has aired TV spots, including one criticizing De La Cruz as too extreme on abortion, but they have been little match for the GOP blitz.

Of the three South Texas districts that Republicans are targeting, the 15th would have been the closest in the 2020 presidential election. Former President Donald Trump would have carried it by 3 percentage points. But Democratic outside groups are having to defend sitting lawmakers in the two other districts, and October is traditionally a time when such groups have to make tough decisions about which races to prioritize. The DCCC is also confronting money problems as it tries to save the Democratic majority in the House.

“This is classic DCCC,” Hinojosa said. “Instead of there’s a fire that needs to be dealt with, instead of doing what good Democrats do, is you run in there and you do what you can to make sure that your people are taken of and safe, they’re running away just because they don’t like the numbers.”

Hinojosa said any polling does not reflect the enthusiasm he sees on the ground in the district, where more Democrats are knocking on doors than probably anywhere else in Texas.

“Michelle has been counted out and outspent at every step of this campaign, and yet she just keeps winning,” Vallejo campaign spokesperson Alejandro Garcia said in a statement. “Her community has rallied around her campaign and it’s that grassroots energy that’s going to carry us to victory in November.”

One of Vallejo’s biggest supporters, Wendy Davis, was among those who hardly concealed their outrage at the Axios report Sunday. Davis is the 2014 gubernatorial nominee who ran for Congress in 2020 with strong DCCC backing.

“WTAF?!?!” Davis tweeted Sunday, using the acronym for “what the actual fuck?” “So the @DCCC is throwing in the towel in the only truly swing seat in TX? If @MichelleVforTX loses this race and the national narrative continues with the ‘Ds are losing Latinos’ message, we’ll have @HouseMajPAC and the DCCC to thank.”

Republicans wasted little time responding to the Axios report. De La Cruz seized on the news in her own tweet, saying she was not surprised because Democrats “abandoned Latinos a long time ago.”

In-state Democrats also blasted the DCCC in June after the committee largely sat out the special election for another South Texas district, the 34th. The committee reasoned that it was not worth the effort given that the winner would only occupy the seat for a matter of months and that the version of the district on the November ballot was redrawn to be safer for Democrats. Republicans won the special election, getting an early boost of momentum in their South Texas offensive, and now Gonzalez is seeking reelection there in a race that has turned more competitive than expected.

Democratic frustrations with the 15th District continued to flare Monday.

“Border communities in CD15 once again find ourselves in familiar territory -- disinvested in by the national Democratic establishment,” Danny Diaz, political director of LUPE Votes, a progressive organizing group that has heavily supported Vallejo, said in statement. “We understand that we have to carry our own weight, and build our own movement here at home -- but to step out of the race on the 11th hour is a slap on the face to the working families of CD15.”

For progressives, it was an especially appalling move after they watched party leadership stand by Cuellar in his hotly contested primary, despite his well-known opposition to abortion. Cuellar’s primary challenger, Jessica Cisneros, said in a series of tweets Sunday that South Texas Latinos were getting the “short end of the stick” and money was instead being “poured into [Cuellar’s district] to mitigate the electability issue Cuellar has since the FBI raid.”

The FBI raided Cuellar’s Laredo home in January and still has not said what agents were investigating. He has denied any wrongdoing, but it has not stopped Republican outside groups from airing TV ads reminding voters of the raid.

This article originally appeared in The Texas Tribune at https://www.texastribune.org/2022/10/10/dccc-democrats-tx-15-texas/. 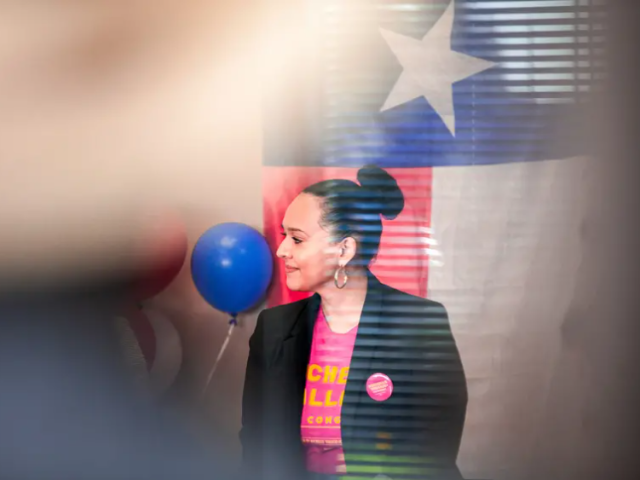