Texas’ elected Supreme Court: What to know before voting for justices

By Emma Williams, The Texas Tribune

Texas is one of only eight states that hold partisan elections for their supreme courts. But seven out of the nine members on the Texas Supreme Court were first appointed by a state governor — meaning just two current members started on the court after being elected.

An appointed judge has to run again once the term of the position they assumed is over, but they almost always win.

“They run as the incumbent Republican member. And guess what, it’s worked like magic in this basically Republican state,” said Ron Beal, a professor emeritus at Baylor Law School.

The Texas general election is only weeks away, on Nov. 8. Texas voters will have the opportunity to choose whether to reelect or replace three justices who were initially appointed to their seats.

Most voters don’t know a lot about the judges up for election, so they tend to vote along party lines, Beal said. The Texas Supreme Court has not had a Democratic judge since the 1990s.

Texas is one of just two states that have two types of courts of last resort. While the Texas Supreme Court deals with civil cases, the Court of Criminal Appeals is the final place for criminal cases.

“The docket, meaning the number of cases, would be so huge that nothing would get out in a timely fashion from the Supreme Court, and that is why they created the Court of Criminal Appeals,” Beal said.

The Texas Supreme Court has the power to make sweeping decisions that interpret the state’s constitution, impacting the lives of Texans across the state. This played out prominently during the pandemic when the court lifted the ban on evictions and debt collections, extended rent relief programs and routinely overturned local mask mandates.

The court has been an integral mechanism in keeping laws in place that restrict abortion access in Texas. Most recently, the Texas Supreme Court ruled that the state could enforce a 1925 abortion ban following the reversal of Roe v. Wade. The ruling makes abortion providers liable to lawsuits and financial penalties if they continue to perform the procedure. The court also ended the battle to block Senate Bill 8, which effectively bans abortions in Texas after about six weeks into a pregnancy, when it ended a series of legal challenges prompted by abortion providers.

Americans don’t choose all their judges in elections. Justices for the U.S. Supreme Court, for example, are appointed by presidents, not elected by voters. The U.S. Supreme Court has recently faced criticism that its rulings are not representative of the wants of the American people.

“This is an opportunity that we have for direct participation in democracy that we do not have at the federal level,” said John Murphy, a law professor at Texas A&M University. “People who are interested in the shape of the law and the future of the law and the interpretation of the law should, by all means, vote in the general elections for judges at any level, but especially in the Supreme Court of Texas.”

Who’s on the ballot this year?

There are three seats up for election this year. Judicial campaigns are different from other types of campaigns. Candidates tend to campaign on their experience and endorsements, and they avoid outlining how they will rule in cases because the state’s judicial code of conduct forbids candidates from making those kinds of pledges.

The best way to gauge what a judge will do is to look at the values of who appointed and endorsed them, said Beal, the former Baylor law professor.

Debra Lehrmann is the Republican incumbent up for election in Place 3. She was appointed to the position by former Gov. Rick Perry in 2010 and has since been reelected twice. She is endorsed by Abbott, Texas Alliance for Life and the Texas Civil Justice League political action committee.

Erin Nowell is the Democrat challenging Lehrmann. She serves on the 5th District Court of Appeals. She is endorsed by the Houston LGBTQ+ Political Caucus, the Texas AFL-CIO and the Texas chapter of the American Federation of Teachers.

Rebeca Huddle is the Republican incumbent and was appointed by Gov. Greg Abbott in 2020. This is her first time running for reelection. She is endorsed by Abbott, Texas Alliance for Life and the Texas Civil Justice League PAC.

Amanda Reichek is the Democrat running against Huddle. She serves on the 5th District Court of Appeals. She is endorsed by the Houston LGBTQ+ Political Caucus, the Texas AFL-CIO and the Texas AFT.

Evan Young is the most recent appointee to the Texas Supreme Court after Abbott put him up for the position in November 2021. This is his first time running for reelection. He previously clerked for Justice Antonin Scalia of the U.S. Supreme Court. He is endorsed by Abbott, Texas Alliance for Life and the Texas Civil Justice League PAC.

The Democrat challenging Young is Julia Maldonado. She is the Harris County presiding family court judge. She is endorsed by the Texas AFL-CIO and Texas AFT.

"Texas’ elected Supreme Court: What to know before voting for justices" was first published by The Texas Tribune, a nonprofit, nonpartisan media organization that informs Texans — and engages with them — about public policy, politics, government and statewide issues.

Disclosure: Texas A&M University, Texas AFT and the Texas Civil Justice League have been financial supporters of The Texas Tribune, a nonprofit, nonpartisan news organization that is funded in part by donations from members, foundations and corporate sponsors. Financial supporters play no role in the Tribune’s journalism. Find a complete list of them here. 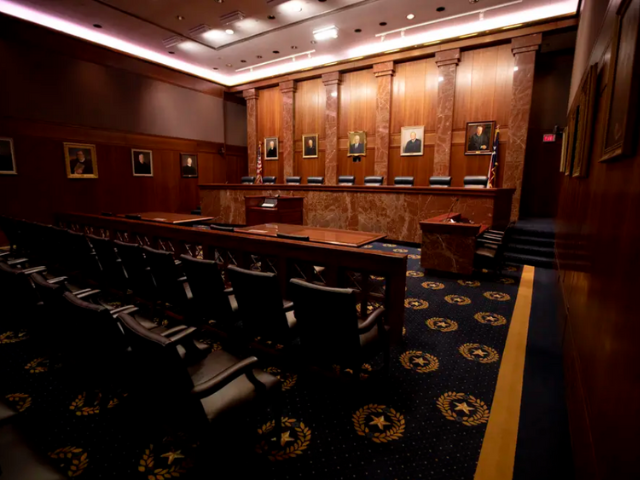