Texas gets drive-through coronavirus testing in San Antonio, but it's not open to the general public 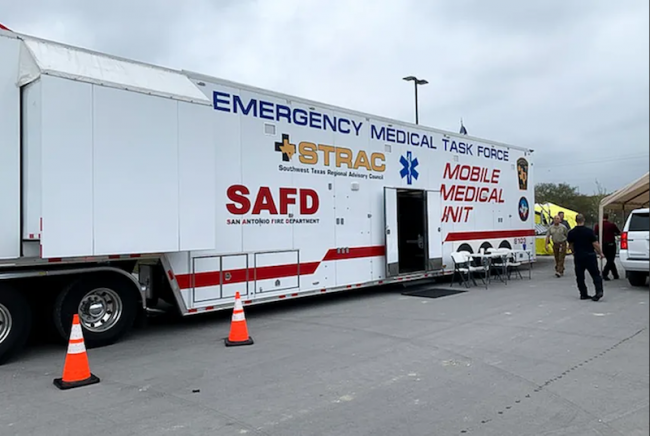 By Sami Sparber and Raga Justin, The Texas Tribune March 13, 2020

The drive-through testing is not open to the general public, officials said in a press release.

Testing will be open all week during business hours to those who qualify, Joe Arrington, a public information officer for the San Antonio Fire Department, told The Texas Tribune. In order to use the drive-through test, a person’s employer must confirm he or she is ill and meets the criteria to be tested — having symptoms of COVID-19 and testing negative for the flu, Arrington said. The organization will also schedule the testing on the employee’s behalf.

There have been 12 coronavirus cases in Bexar County so far, 11 of them stemming from the Lackland Air Force Base. The statewide number of confirmed cases is at least 50, though limited testing means the number of people infected could be much higher. The state's two largest urban areas have already seen community spread of the virus.

Texas joins at least eight other states that have implemented drive-through testing centers in the past week or plan to do so immediately: New York, California, Washington, Colorado, Utah, Minnesota, Delaware and Indiana.

The new facility is part of a broader expansion of the state's testing capacity that was announced Friday. Earlier in the day, the state's public labs had the capacity to perform only 270 tests per day, causing many patients — including medical personnel — to be turned down. That number should soon grow into the thousands, state officials said.

Drive-through testing should account for “hundreds of tests” per day, said Charles Lerner, an epidemiologist based in San Antonio. The tests have a turnaround of three to four days, he said.

“Everybody [here] was very slow,” Lerner said. “The light just got turned on in the last 24 hours. This is a move in the right direction.”

President Donald Trump, who declared a national emergency Friday over the coronavirus pandemic, said at a press conference that his administration has “been in discussions with pharmacies and retailers to make drive-through tests available in critical locations identified by public health professionals.”

“The goal is for individuals to be able to drive up and be swabbed without having to leave your car,” Trump said Friday.

Only the first 100-150 vehicles in line were able to access the drive-through, forcing health officials to turn people away. The state’s public health department advised drivers to seek testing from private providers.

This article originally appeared in The Texas Tribune at https://www.texastribune.org/2020/03/13/drive-through-coronavirus-testing-comes-san-antonio-texas/.