By Uriel J. García and Zach Despart, The Texas Tribune

UVALDE — On the same day that a Texas House committee investigating the Uvalde school shooting announced plans to release footage of law enforcement response to the incident, a video showing police waiting for more than an hour in the school hallway before confronting the shooter was published by the Austin American-Statesman and KVUE-TV.

[“If there’s kids in there, we need to go in”: Officers in Uvalde were ready with guns, shields and tools — but not clear orders]

The apparent leak of the video before victims’ families could view it drew ire from local and state leaders.

At a Uvalde City Council meeting Tuesday night, Mayor Don McLaughlin said it was unprofessional to have leaked the video to news outlets. He said families deserved to have viewed the video first before anyone else.

“The way that video was released today was the most chicken thing I’ve ever seen,” the mayor, stopping short of cursing, said during the meeting attended by residents and families affected by the shooting.

State Rep. Dustin Burrows, a Lubbock Republican and the committee’s chair, said earlier Tuesday that he planned to lead a private briefing for victims’ families in Uvalde on Sunday morning, allowing them to see the hallway video from a Robb Elementary School surveillance camera and discuss the committee’s preliminary report. Then the committee would release the video and the report to the public and answer questions from reporters, he said.

[What we know, minute by minute, about how the Uvalde shooting and police response unfolded]

But hours after that announcement, the Statesman and KVUE published a 1-hour-and-22-minute version of the video, edited to remove the sound of children screaming and to obscure the identity of a student who ran from the shooter in the hallway. It depicts police arriving at the scene quickly and approaching two classrooms where the gunman, an 18-year-old Uvalde resident, was shooting. The officers retreat after being fired on and do not reapproach for more than an hour, when several breach one of the classrooms and fatally shoot the gunman who killed 19 students and two teachers.

Multiple law enforcement officers from Uvalde, the state Department of Public Safety, U.S. Border Patrol and other agencies can be seen in the video. Many were heavily armed and had shields but waited more than an hour before they stormed the classroom.

Much of the details shown in the video have already been disclosed in media reports and details released by law enforcement. The Texas Tribune reviewed the footage on June 20, publishing a detailed written account based on the footage, other media reports and law enforcement records. The Tribune and the Statesman have also both published still images from security footage.

But the video itself shows in agonizing detail the waiting done outside the classroom.

Its release drew frustration from some state officials who said they wanted the families of the victims to have the opportunity to see the footage first. Burrows said Tuesday before the video’s publication that “we feel strongly that members of the Uvalde community should have the opportunity to see the video and hear from us before they are made public.”

Afterward, he said he was “disappointed.” And DPS Director Steven McCraw said in a statement those “most affected should have been among the first to see it.”

It’s unclear who provided the video to the Statesman and KVUE.

The footage is being made public over the objection of the Uvalde County district attorney, who had instructed DPS not to provide the video to the committee.

“​As I stated during my testimony before the Senate Special Committee to Protect All Texans, this video provides horrifying evidence that the law enforcement response to the attack at Robb Elementary on May 24 was an abject failure,” McCraw said Tuesday. “In law enforcement, when one officer fails, we all fail.”

Their report will be the second investigation into the law enforcement response of the shooting to be made public. Last week, the Advanced Law Enforcement Rapid Response Training Center, located at Texas State University in San Marcos, released its comprehensive account of police tactics during the shooting.

Moody, the lone Democrat on the committee, said on Twitter that the report the House committee is preparing to release Sunday will provide more context to the video.

“A piecemeal release of information continues to tell part of a story that people deserve the complete truth about,” he said.

McCraw has said Uvalde schools police Chief Pete Arredondo was most responsible for a flawed response to the shooting. Uvalde CISD Superintendent Hal Harrell placed Arredondo on leave last month. Arredondo was elected to the Uvalde City Council before the shooting but wasn’t sworn in until after the massacre. Arredondo submitted his resignation from the City Council earlier this month. At Tuesday’s meeting, council members formally accepted that resignation and set a special election to fill his seat for November.

Since the May 24 shooting, community members have repeatedly pressed officials for details about what happened. Those calls intensified after Gov. Greg Abbott and DPS officials initially made several inaccurate statements about the police response. The governor and McCraw have since said that video footage from the school surveillance cameras should be released.

In Uvalde on Tuesday night, residents told McLaughlin it’s his job to stand up for the families who lost loved ones and get details of the investigations.

“If it means losing your seat, so be it,” she said.

Uvalde pastor Daniel Myers told the mayor he needs “to quit being so nice and step on some toes.”

The mayor said he was trying to get answers for the families.

Myers responded: “Well you need a bigger foot because they’re stepping all over you.”

Adam Martinez, whose 8-year-old son was at the school during the shooting, said the mayor blaming others is an excuse to not accept responsibility for not providing information to the families on the investigation.

“We used to have confidence in him but he hasn’t given us anything,” Martinez said. “He can do name calling but what we need is information.”

This article originally appeared in The Texas Tribune at https://www.texastribune.org/2022/07/12/texas-house-investigators-uvalde-shooting-video/. 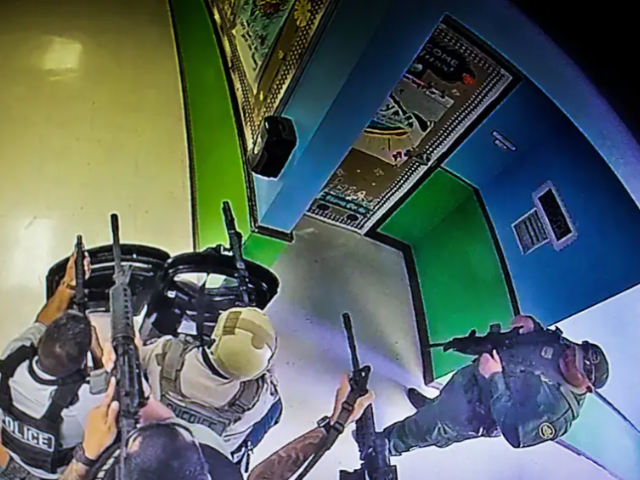