By Cassandra Pollock, The Texas Tribune

A Texas House committee voted out a revised draft to redraw the lower chamber’s districts, which will give Republicans stronger positioning in the House of the Legislature for the next decade. The Oct. 5 committee vote puts the proposal on track to hit the House floor for debate in the coming days.

House Bill 1 by state Rep. Todd Hunter, the Corpus Christi Republican who chairs the House Redistricting Committee, was changed by lawmakers on the committee during a marathon 16-hour hearing that began Monday morning before it was approved Tuesday along a party line vote. 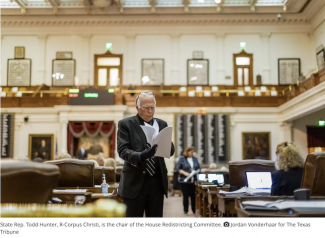 The hearing, which featured hours of public testimony on the proposal and pushback from Democrats that the draft dilutes voting strength of voters of color, lasted into early Tuesday morning before Hunter recessed the committee until that afternoon. The move, he said, would help give committee members time to review changes before they voted on it.

The draft will need a stamp of approval from the full chamber before it can head to the Senate for consideration. And it’s likely to continue to change before the Legislature sends it to Gov. Greg Abbott’s desk for a signature.

The revised HB 1 does not vary drastically from the initial version Hunter filed last week — the draft still aims to increase the GOP’s strength across the state as well as the number of districts in which white residents make up a majority of eligible voters. The latest draft changes the partisan breakdown in the chamber’s 150 districts by adding one district that would lean toward Democrats while still giving Republicans the clear advantage.

Among the changes made to HB 1 ahead of Tuesday’s vote was an amendment by state Rep. Craig Goldman, R-Fort Worth, that redraws Collin County. The change includes turning House District 70 — currently held by state Rep. Scott Sanford, a McKinney Republican who is not seeking reelection — into a Democratic-leaning district.

Another amendment by state Rep. Jacey Jetton, R-Richmond, reconfigures Bell County, which Democrats on the committee argued would split up the Black population in the city of Killeen, where Black residents make up 40% of the population.

The Texas Legislature is in the midst of its third special session of the year — an overtime round ordered by the governor that has focused largely on redrawing the state’s political maps based on the latest census data. Those numbers showed that people of color fueled 95% of the state’s population growth over the past decade.

As Monday’s hearing carried into Tuesday morning, multiple Democrats on the committee asked Hunter to consider adjourning the meeting due to the late hour, arguing that members needed more time to review the proposed changes to the draft. Hunter, though, maintained that the committee would at least plow through the roughly 30 amendments offered, most of which failed or were withdrawn by their authors.

One of the more tense moments during the hearing came early Tuesday morning when an amendment that would have changed House districts in three counties along the Texas-Mexico border failed along a party-line vote. State Rep. Ryan Guillen, a Rio Grande City Democrat who authored the amendment, said that the tweak had been approved by the delegation from the Valley area and would not have impacted other districts. Still, some Republicans on the committee objected to the proposed change.

Another amendment, by state Rep. Rafael Anchía, D-Dallas, would have increased the number of majority-Hispanic districts compared with Hunter’s proposal. It also failed along a party-line vote.

Anchía said he filed it to “literally [demonstrate] just how far the proposed map fails to allow Latino representation of communities of interest in this state,” adding that his amendment would have achieved “a more representative map across the board, regardless of incumbency.”

As the hearing kicked off Monday, Hunter pushed back against reports that the House proposal reduced the number of majority-Black and majority-Hispanic districts based on eligible voters.

The Texas Tribune’s analysis of the maps used citizen voting age population from the census estimates to determine that the proposal increases white-majority districts while decreasing the number of districts where Black and Hispanic eligible voters will be the majority. Hunter said the Texans counted under the CVAP metric are “estimates” that “leave out important information.”

CVAP is the census’ estimate of residents who are eligible to vote, but Hunter said voting age population data was a more accurate metric since it’s based on the latest census figures lawmakers received earlier this year. VAP, however, includes noncitizens who aren’t eligible to vote.

“I want everyone to realize analysis based on estimates is not the same [as] based on census numbers,” Hunter said.

While Hunter discounted the use of citizen voting age population, it is a crucial measure for considering adequate representation for voters of color through what are known as opportunity districts. In a Hispanic opportunity district, for example, Hispanic Texans would need to make up the majority of eligible voters and usually have the opportunity to elect their preferred candidates. That district would also have to meet other complex criteria beyond population numbers.

In the protracted litigation over the state’s maps from the last decade, federal judges noted that the standard for considering opportunity districts required a majority citizen voting age population. In defending the maps in court, the state itself counted the number of Hispanic opportunity districts based on those where Hispanics were the majority of eligible voters, based on CVAP estimates.

Earlier Monday, Hunter also addressed the hiring of Adam Foltz, a Republican redistricting operative who was involved with drafting Wisconsin’s legislative maps after the GOP took control of that state’s Legislature in 2010. The effort, according to a federal court that ultimately threw out some of those maps, was dubbed “an all but shameful attempt to hide the redistricting process from public scrutiny.”

Foltz, though on the payroll of the Texas Legislative Council, reports to Hunter, the lawmaker said, adding that the staffer had been involved in meetings with both Democrats and Republicans throughout the mapmaking process. During his involvement with Wisconsin’s redistricting, Foltz held meetings with every GOP member of the State Assembly but no Democrats, and lawmakers were required to sign confidentiality agreements to prevent further discussion over what was said.

Asked by state Rep. Chris Turner, D-Grand Prairie, whether he was aware of Foltz’s history ahead of hiring him, Hunter said he did “not know what happened in Wisconsin” and “did not even inquire” about it.

“When I saw his resume, he looked like a data person,” Hunter told Turner, who chairs the House Democratic Caucus. “I thought he would be good — and I chose him.”

Alexa Ura contributed to this report.

This article originally appeared in The Texas Tribune at https://www.texastribune.org/2021/10/05/texas-house-redistricting-committee-map/.