A legal cloud hanging over nearly 127,000 votes already cast in Harris County was at least temporarily lifted Sunday when the Texas Supreme Court rejected a request by several conservative Republican activists and candidates to preemptively throw out early balloting from drive-thru polling sites in the state's most populous, and largely Democratic, county.

The all-Republican court denied the request without an order or opinion, as justices did last month in a similar lawsuit brought by some of the same plaintiffs.

The Republican plaintiffs, however, are pursuing a similar lawsuit in federal court, hoping to get the votes thrown out by arguing that drive-thru voting violates the U.S. constitution. A hearing in that case is set for Monday morning in a Houston-based federal district court, one day before Election Day. A rejection of the votes would constitute a monumental disenfranchisement of voters — drive-thru ballots account for about 10% of all in-person ballots cast during early voting in Harris County.

After testing the approach during the July primary runoff with little controversy, Harris County, home to Houston, set up 10 drive-thru centers for the fall election to make early voting easier for people concerned about entering polling places during the pandemic. Voters pull up in their cars, and after their registrations and identifications have been confirmed by poll workers are handed an electronic tablet through their car windows to cast ballots.

In a last-minute filing to the Supreme Court, litigious conservative Steven Hotze and Harris County Republicans state Rep. Steve Toth, congressional candidate Wendell Champion and judicial candidate Sharon Hemphill sought to have the votes declared illegal. They argued that the drive-thru program was an expansion of curbside voting, and under state election law should only be available for voters with disabilities. The same argument had been made in an unsuccessful previous legal challenge from Hotze and Hemphill — along with the Harris County Republican Party — filed at the state Supreme Court hours before early voting began.

Curbside voting, long available under Texas election law, requires workers at every polling place to deliver onsite curbside ballots to voters who are “physically unable to enter the polling place without personal assistance or likelihood of injuring the voter's health.” Posted signs at polling sites notify voters to ring a bell, call a number or honk to request curbside assistance.

The Harris County Clerk’s Office argued that its drive-thru locations are separate polling places, distinct from attached curbside spots, and therefore can be available to all voters. The clerk’s filing with the Supreme Court in the earlier lawsuit also said the Texas secretary of state’s office had approved of drive-thru voting. Keith Ingram, the state’s chief election official, said in a court hearing last month in another lawsuit that drive-thru voting is “a creative approach that is probably okay legally,” according to court transcripts.

Plus, the county argued in a Friday filing that Texas's election code, along with court rulings, have determined that even if the drive-thru locations are violations, votes cast there are still valid.

"More than a century of Texas case law requires that votes be counted even if election official[s] violate directory election laws," the filing said.

The challenge was the latest in a flurry of lawsuits on Texas voting procedures filed in recent months, with Democrats and voting rights groups pushing for expanded voting access in the pandemic and Republicans seeking to limit voting options. In this case, the lawsuit filed Tuesday asked the state Supreme Court to close Harris County’s 10 new drive-thru polling places and not count votes that had been cast at them during early voting.

The court has recently ruled against other last-minute challenges on voting access by noting that the cases were filed too late, and that changes to voting procedure during an election would sow voter confusion.

Since the first Republican challenge to drive-thru voting was filed on Oct. 12, the Texas secretary of state and Gov. Greg Abbott had both ignored requests from reporters and Harris County officials to clarify their positions on whether the process was legal. Republican Texas Attorney General Ken Paxton sent a letter to all local election officials claiming that most voters can’t legally vote at drive-thru locations, fueling speculation that the all-Republican Supreme Court would use the case to invalidate ballots already cast. The court rejected the case the next week, with a lone dissent from Justice John Devine.

The new challenge by Republicans again asked the court to reject drive-thru voting as an illegal expansion of curbside voting, and went further by also asking the court to issue an order rejecting votes already cast.

“Unless stopped, illegal votes will be cast and counted in direct violation of the Texas Election Code and the United States Constitution and result in the integrity of elections in Harris County being compromised,” the petition to the court said.

The county clerk's office countered that the first challenge to drive-thru voting had already been denied, and the second filing came much too late.

"Hotze filed a petition contesting drive thru locations on the third day of early voting which this Court already denied," the clerk's Friday filing said. "He filed this second petition two-and-a-half weeks into early voting, six days before Election Day, and after fifty percent of registered voters have already voted."

The tens of thousands of votes are still in flux, however, as the federal courts now weigh the issue. Hotze and the others asked the district court this week to toss the votes, arguing the county's implementation of drive-thru voting violates the U.S. Constitution. The campaign of Texas' Democratic U.S. Senate candidate, MJ Hegar, along with national Democratic campaign groups have asked to intervene in the lawsuit — following a national trend in Republican-led fights against voting expansions during the tumultuous election.

Disclosure: The Texas secretary of state has been a financial supporter of The Texas Tribune, a nonprofit, nonpartisan news organization that is funded in part by donations from members, foundations and corporate sponsors. Financial supporters play no role in the Tribune's journalism. Find a complete list of them here.

This article originally appeared in The Texas Tribune at https://www.texastribune.org/2020/11/01/texas-drive-thru-votes-harris-county/. 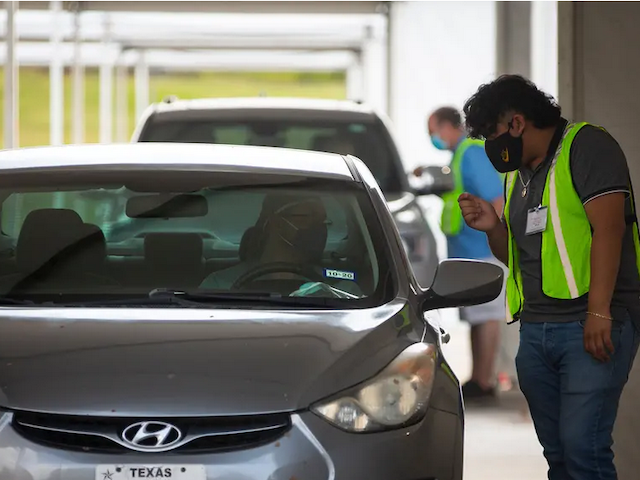