Texas voters have serious concerns about voting and the 2020 election, UT/TT Poll finds

Texas voters have serious concerns about voting and the 2020 election, UT/TT Poll finds

Less than half of Texas registered voters are confident that Americans will trust the results of the presidential election, and fewer still said they themselves will trust those results, according to the latest University of Texas/Texas Tribune Poll.

While 47% said Americans will trust the results, only 16% said they are “very confident” that will happen. And 44% said they’re not confident, including 15% who are “not at all confident.” The rest offered no opinion.

Asked if they themselves will “trust the result of the presidential election, regardless of who wins,” 41% said yes, 14% said no, and 46% said they were either unsure or don’t know. Republican voters (39%) were less likely than Democrats (45%) to say they’ll trust the results, and women (37%) were less likely than men (45%). In all subgroups, the percentage of respondents who were unsure about trusting the presidential election results was between 40% (men) and 52% (independent voters).

“Ultimately, all of the negative attention that’s been lavished on our election process is having the effect we would expect it to have, that people’s confidence in the system is lower than I think anyone would like it to be,” said Joshua Blank, research director of the Texas Politics Project at the University of Texas at Austin.

“It’s not a story of just Democrats or just Republicans,” he said. “More than half in both parties say they’re not going to trust the results, or they’re not sure.”

Republicans are more optimistic about a fast result: 34% think the winner will be announced on Election Day, a view shared by 23% of Democrats and 20% of independents.

What could go wrong?

Voters’ greatest concern on a list of potential problems in the 2020 election is “misinformation spread on social media,” a potential trouble spot rated “extremely” or “somewhat” serious by 82% of registered voters, including 87% of Democrats and 79% of Republicans.

That’s also the sole item that voters from the two parties agree is a big concern.

“There are two things people broadly agree on. One is that social media is bad for elections,” said James Henson, co-director of the poll and head of the Texas Politics Project at UT-Austin. “And the other is that everybody, likely for different reasons, is skeptical about either their willingness or the willingness of others to accept the results of the election.”

“This is part of a long arc of loss of faith in the election system,” Henson said. “This predates Donald Trump, but like many things, his relentless criticism has accelerated something that was already happening.”

For Republican voters, two other items that could be the most serious problems in this election are “people voting who are not eligible,” and “votes being counted inaccurately.” Each was picked as “extremely” or “somewhat” serious by 81% of Republicans. But only 30% of Democrats think ineligible voters will be a big issue, and 57% of Democrats pointed to vote counts, an item that ranked fourth on Democratic voters’ list of concerns.

Eighty percent of Republican voters chose “people voting multiple times” as a serious issue in this election. Only 32% of Democrats did. “An increase in voting by mail” was a trouble spot for 79% of Republicans, but only 31% of Democrats.

And while Republicans are concerned about ineligible voters casting ballots, 83% of Democrats are worried about “eligible voters being prevented from voting” — an item of concern to 40% of Republicans, the poll found.

In addition to social media and its potential for misinformation, the possibility of votes being counted inaccurately was listed as “extremely” or “somewhat” serious by majorities of both Democratic and Republican voters.

“This notion that the system is either incompetent or corrupt or both is sort of pervasive,” he said.

How Texans plan to vote

If they hold to that, they’ll outnumber the Democrats on Nov. 3: Only 15% of Texas Democrats said they’ll vote on Election Day, while 59% plan to vote early and in person, and 25% plan to vote by mail.

Roughly a third of Black voters (34%) in Texas plan to vote by mail, the choice of 7% of Hispanic voters and 11% of white voters.

Support for allowing all Texas voters to vote by mail falls just short of a majority, at 49%, while 41% of registered voters oppose the idea. There is a strong partisan undercurrent in those overall numbers. Among Republicans, only 16% support letting everyone vote by mail, while 72% oppose that option. Among Democrats, the numbers are flipped: 87% approve while 8% oppose universal voting by mail.

That divide is wider than it was in April of this year, when a UT/TT Poll found 59% of Republican voters were against the mail option for everyone. At that time, 86% of Democrats said they favor expanding the option to every voter.

A strong majority of voters — 63% — support allowing Texans to register to vote online, an option that’s not currently offered by the state. Only 24% oppose the idea, while the rest offered no opinion. That’s a small increase from the responses to a June 2018 UT/TT Poll, when 57% supported the idea and 22% opposed it.

The University of Texas/Texas Tribune internet survey of 1,200 registered voters was conducted from Sept. 25 to Oct. 4 and has an overall margin of error of +/- 2.83 percentage points. Numbers in charts might not add up to 100% because of rounding.

Disclosure: The University of Texas at Austin has been a financial supporter of The Texas Tribune, a nonprofit, nonpartisan news organization that is funded in part by donations from members, foundations and corporate sponsors. Financial supporters play no role in the Tribune's journalism. Find a complete list of them here.

This article originally appeared in The Texas Tribune at https://www.texastribune.org/2020/10/12/texas-voters-election-poll/. 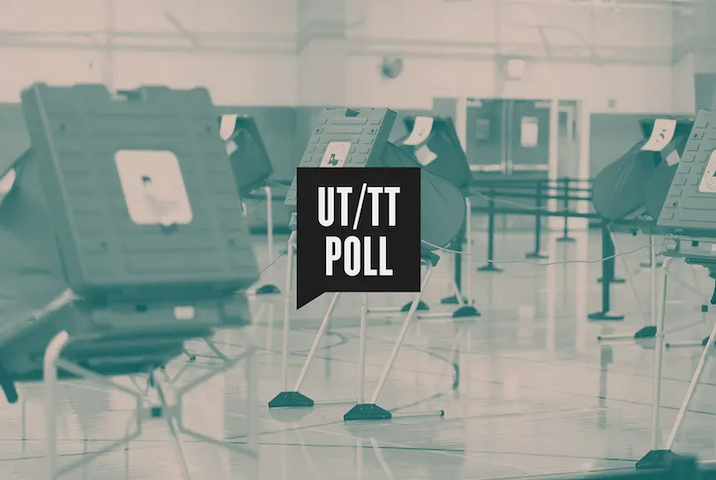