By Eleanor Klibanoff, The Texas Tribune

A new lawsuit filed June 8th is challenging Gov. Greg Abbott’s directive to investigate parents who provide gender-affirming care to their transgender children. The lawsuit was filed by the American Civil Liberties Union and Lambda Legal on behalf of three families, including the Briggle family, who have long been advocates for trans rights, including hosting Republican Attorney General Ken Paxton for dinner with their transgender son.

The lawsuit also seeks to block the state from investigating any families that belong to PFLAG, an advocacy group for parents and family members of LGBTQ+ people.

The state is currently blocked from investigating one family that brought a prior legal challenge. This lawsuit seeks to widen the number of people who cannot be investigated under the directive; according to the filing, PFLAG’s 17 chapters in Texas have over 600 members combined.

At least nine families are currently under investigation for potential child abuse by the Texas Department of Family and Protective Services for providing gender-affirming care to their transgender children.

Gender-affirming care is endorsed by all the major medical associations as the proper treatment for gender dysphoria, which is the distress someone can feel when their assigned sex doesn’t align with their gender identity. While many young people focus on social transition — dressing differently or using different pronouns — some are prescribed puberty blockers, which are reversible, or hormone therapy.

In February, Paxton issued a nonbinding legal opinion equating gender-affirming medical care with child abuse. Days later, Abbott followed that opinion with a directive telling DFPS to investigate these cases. The agency said in a statement at the time that it would “follow Texas law … in accordance with Governor Abbott’s directive.”

The ACLU and Lambda Legal sued Abbott and DFPS on behalf of a family under investigation, seeking a court order stopping these investigations more broadly. The Texas Supreme Court ultimately ruled that the court could temporarily stop the investigation into the family that brought the suit, but would not shield all parents of transgender children.

Some investigations resumed after that ruling.

Now, the ACLU and Lambda Legal have brought this new suit on behalf of three specific families and PFLAG, arguing that “every one of PFLAG’s Texas members with a transgender child, or those with children still learning who they are, is at substantial risk of harm.”

“For nearly 50 years, PFLAG parents have united against government efforts to harm their LGBTQ+ kids,” said Brian K. Bond, executive director of PFLAG National. “By going after trans kids and their families, Gov. Abbott has picked a fight with thousands of families in Texas and across the country who are united as members of PFLAG National.”

According to the lawsuit, a 16-year-old transgender boy tried to kill himself the same day that Abbott issued the child abuse directive.

“[He] said that the political environment, including Abbott’s Letter, and being misgendered at school, led him to take these actions,” the lawsuit said.

He survived the attempt and was admitted to an outpatient psychiatric facility, where staff learned that he was undergoing hormone therapy. A week after he was discharged, an investigator from DFPS visited the family’s home and, according to the lawsuit, said that the psychiatric facility had reported the family for child abuse. The family remains under investigation.

Join us Sept. 22-24 in person in downtown Austin for The Texas Tribune Festival and experience 100+ conversation events featuring big names you know and others you should from the worlds of politics, public policy, the media and tech — all curated by The Texas Tribune’s award-winning journalists. Buy tickets.

This article originally appeared in The Texas Tribune at https://www.texastribune.org/2022/06/08/transgender-texas-child-abuse-lawsuit/. 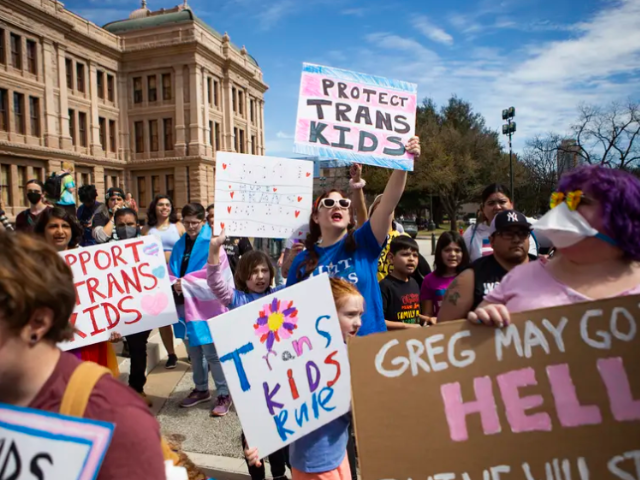