Update: Students Hunger for the DREAM Act, a Video Documentary

For over a month, students at the University of Texas at San Antonio have followed in Mahatma Gandhi’s footprints, drinking only juice or water in a hunger strike to give legal status to undocumented immigrants who came to the United States when they were children.

The hunger strike to enact the so-called DREAM Act has gained national attention and has become a passionate issue for those who say undocumented immigrants brought to the country as minors now face deportation and can’t get jobs even if they obtain a university degree.

Nine years after it was proposed in 2001, the House approved the measure Dec. 8, although it faces a difficult battle in the Senate.

As the strike and other peaceful movements continue, health concerns mounted about their long days without food. Of the 12 who began their strike on Nov. 10, organizers four are still fasting,  drinking only water or fruit juices.

For a brief period, two of them, Methodist Minister Lorenza Andrade Smith and UTSA freshman My Le, began an “air-fast.” That is, not even liquids. Doctors and nutritionists, including a San Antonio nutritional expert on fasting, are attending them.

“We want to sleep all the time. There’s nausea and we’re tired and tense. Some of us are having heart palpitations and we’re losing two-three pounds a day,” said Martha Quintanilla, a UTSA senior. “But we’re determined. This is something very serious for us. If the DREAM Act doesn’t pass, like it hasn’t for the last ten years well, we’ll continue fighting. If it does, we will celebrate.”

Quintanilla and other students, families, supporters and Hispanic activists gathered at Main Plaza on Monday after meeting with Mayor Julian Castro, who asked the students to end their fast and give the lawmaking process a chance.

“The awareness these students have brought to this very important issue is important, but so is their health,” said Castro,“ who like many Democratic leaders, including President Obama, supports the DREAM Act.

In an interview with journalism students at St. Mary's University Tuesday, Rep. Charlie Gonzalez (D-San Antonio), the newly elected chairman of the Congressional Hispanic Caucus, said he and other representatives were meeting to push for  a vote on Wednesday Dec. 8.

Gonzalez, who strongly supports the DREAM Act, said the bill's best chance is now, during the last days of 2010. He predicted it would have little chance of passing in 2011, when Republicans will have a majority in Congress.

The students have been demanding to speak to Sen. Kay Bailey Hutchison (R-Texas) because she is a crucial swing vote, and originally only one of seven Senate Republicans supporting it. But she later retracted, saying she didn’t know it could legalize the status not only of students but of their families as well.

"The current legislation would include green cards and citizenship, which under present law would follow with amnesty for those who came here illegally as adults," her office said in an e-mail distributed Dec. 6.

“[Hutchison] has and continues to support allowing for student and temporary, renewable visas for qualified students and graduates who have grown up and been educated in the United States,” read the statement. “But she will not support legislation now being put forward as the DREAM Act because it goes far beyond dealing with these affected young people.”

Many of the strikers say they want to hear from Hutchison directly.

“All we want is dialogue with the senator. We want to know why she supported the bill three years ago, and now won’t vote for the DREAM Act,” said Lucina Martinez, a sophomore at UTSA majoring in Mexican-American studies.

Martinez, 20, broke her fast Thursday and ate soup after the House passed a version of the act in a 216-198 vote Wednesday. She had traveled to Washington to lobby for the bill but had gotten so weak, she had to get around in a wheelchair.

On Nov. 29, Martinez, Andrade, former San Antonio councilwoman Maria Berriozabal and 13 students and supporters were led away in handcuffs after a sit-in at Hutchison’s office, located in the Port of San Antonio. Police asked them to vacate and gave them a five-minute warning, but they refused and were jailed.

They face criminal trespass charges and all but Andrade were released on bail the next day. After choosing to continue her protest in jail for a week, the pastor was released on Dec. 7.

Martinez, who said she was “undocumented and unafraid,” co-founded the DREAM Act support organization with fellow UTSA student Pamela Resendiz, organizing the hunger strike on Nov. 10.

She was interviewed on Dec. 7 on the Diane Rehm Show. Click here to listen to that interview. Go here to see the students' blog.

At the heart of the issue is what DREAM stands for: The Development, Relief and Education of Alien Minors Act that would provide a path to legalization for undocumented immigrants who came to the United States before the age of 16 and who graduate from college or serve in the U.S. military for at least two years.

According to the Center for Immigration Studies Web site, 2.1 million people who came to the United States without visas would benefit and another 1.4 million, parents and siblings, would also fall under DREAM Act guidelines.

Five of the seven strikers are now in Washington D.C. for the expected vote. Student Felipe Vargas, also on the hunger strike, told reporters Monday that five of the original 12 UTSA students are "risking deportation."

Not many students anticipated the hunger strike to last as long as it has.

“Maybe tomorrow I will resent not having breakfast and tacos, or pancakes, or anything like that, but today has been good,” Quintanilla said at the beginning of her fast.

For more information about the DREAM Act, visit http://dreamact.info/.

Story edited by Susana Hayward, who also contributed material for the story. 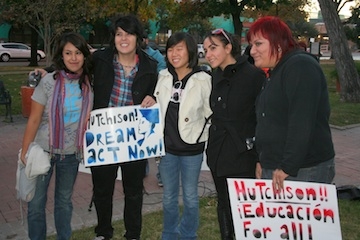