The 700,000 Dreamers in the United States have held their breath for the past three years, expecting the worst from the U.S. Supreme Court after the Trump administration said it would end the Deferred Action for Childhood Arrivals (DACA).

But their reaction was jubilant relief on Thursday, March 18, 2020, when the Supreme Court blocked the Trump administration’s efforts in a 5-4 ruling written by Chief Justice John Roberts.

DACA, established  by former President Barack Obama in 2012, granted temporary legal status to live, work and study in the U.S. to undocumented immigrants brought to America as children, also known as Dreamers.

Here, in quotes and Tweets, are responses from across Texas and the nation.

Eight years ago this week, we protected young people who were raised as part of our American family from deportation. Today, I'm happy for them, their families, and all of us. We may look different and come from everywhere, but what makes us American are our shared ideals…

These horrible & politically charged decisions coming out of the Supreme Court are shotgun blasts into the face of people that are proud to call themselves Republicans or Conservatives. We need more Justices or we will lose our 2nd. Amendment & everything else. Vote Trump 2020! 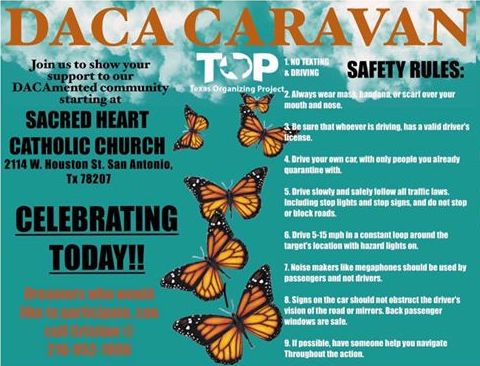 From mayors in Texas, which has an estimated 106,000 DACA recipients:

VICTORY. DACA is here to stay, and so are the hundreds of thousands of Dreamers who strengthen our communities. #HomeIsHere https://t.co/52GNW7TyN4

Over 32,000 Houston #DACA recipients and their families have built lives, pursued their education, and contribute to our city, including $1.1 billion to Houston's economy each year.
Today's #SCOTUS ruling is a victory for recipients and all Americans.#DACADecision #HereToStay pic.twitter.com/TYReiJjsc2

It is time for Congress to put the American people before partisan politics and create a path to citizenship for #DACA recipients. #HomeIsHere

From the U.S. Conference of Mayors:

We applaud today’s Supreme Court decision to uphold the DACA program, ensuring thousands of Dreamers can continue to live, work and study here in the U.S. DACA recipients exemplify the American dream and today’s decision is a victory for all Americans. https://t.co/D6aFLyS4dk pic.twitter.com/x4mx0A5lHL

From members of Congress

Today is a day of celebration for Dreamers, families and our entire country. The Supreme Court affirmed that we're both a nation of immigrants and a nation of laws.

Now it's time for the Senate to do its job and pass the American Dream and Promise Act for permanent protection. pic.twitter.com/yQ1Auww2Kp

SCOTUS' decision reinforces the fact Congress must enact a permanent legislative solution for DACA recipients so they can continue to be part of communities they have always called home. Speaker Pelosi, Leader McConnell it is beyond time for bipartisan, bicameral action on DACA. pic.twitter.com/ElxdQANZTW

From the Mexican American Legal Defense Fund, which helped fight the case on behalf of Texans:

“Today dawned a brighter morning than expected as the Supreme Court delivered great news to our nation.  Because a majority of the Court recognized the importance of integrity in federal policymaking, we will not face the incalculable damage from removing hundreds of thousands of educated, well-qualified workers from our economy.  Despite Donald Trump’s tenacious efforts to punish the nation by targeting immigrants, we will not see the precipitous removal of teachers from the students they inspire, health care workers from the patients they treat, essential employees from the businesses they sustain, soldiers from the nation they protect.  Integrity won the day, to the benefit of all," MALDEF President and General Counsel Thomas A. Saenz. (learn more) (see DACA timeline)

And yes I started sobbing on a Zoom call. It wasn’t embarassing at all.

From universities in Texas

University of Texas at San Antonio

UTSA President Taylor Eighmy released a statement via email to students, faculty and staff stating that UTSA’s Dreamers Resource Center, founded in 2018, will continue to provide services for students.

“To all our DACA and unDACAmented students, staff and faculty, we celebrate with you today. I am relieved and grateful that your educational and professional journeys can move forward without fear and uncertainty surrounding DACA’s status,” Eighmy said.

University of Texas at El Paso:

A message from @UTEPPresident Heather Wilson on the Supreme Court's decision today to uphold DACA. pic.twitter.com/7ghHzdHKz3

NOWCastSA has covered the Dreamers' struggles since 2010. Check out our special section by clicking here.

DACA recipients by the numbers