“What are you going to do about your failures?”: Uvalde parents demand answers at school board meeting

By Uriel J. García and Jaden Edison, The Texas Tribune

UVALDE — Tina Quintanilla-Taylor’s 8-year-old daughter joined an army of angry adults in this town of 15,000 people Monday night and stood at a microphone, looking up to school district officials who sat behind tables draped in maroon cloth on a high school auditorium stage.

The young girl wore the same sundress that she wore to Robb Elementary on May 24, when an 18-year-old gunman massacred 19 students and two teachers.

“Most of those kids were my friends, and that’s not good,” Quintanilla-Taylor’s daughter told school board members and Superintendent Hal Harrell. “And I don’t wanna go to your guys’ school if you don’t have protection.”

For about three hours Monday evening, relatives of the students and teachers killed during the worst school shooting in Texas history demanded the resignation of the school district superintendent, criticized school board members and threatened to keep their children out of school until officials promised to improve campus security.

The school board called the special meeting to let parents and residents provide their thoughts and ask questions about what the district plans to do regarding security for the upcoming school year. Many parents also said they should’ve been given an open platform to voice their concerns much sooner.

The gathering came one day after a Texas House panel report found that nearly 400 law enforcement officers from several agencies descended on the scene of the shooting in a chaotic, uncoordinated response that stretched for 73 more minutes before the gunman was confronted and killed.

Many parents demanded that Harrell and school board members resign unless they fire Uvalde schools police Chief Pete Arredondo by noon Tuesday. Arredondo was among the first officers to arrive at the school the day of the shooting. For weeks, state leaders have said he was the incident commander and blamed him for law enforcement waiting more than an hour to confront the gunman.

Arredondo, who was placed on administrative leave last month, told The Texas Tribune that he did not consider himself the incident commander. The school district’s active shooter response plan that he co-authored, though, says the chief will “become the person in control of the efforts of all law enforcement and first responders that arrive at the scene.”

“He didn’t do anything and you’re still standing by that,” one resident said about Arredondo. “Y’all do not give a damn about our children or us. Stand with us or against us 'cause we ain’t going nowhere.”

The House report released Sunday said failures went beyond local police. The report said 376 law enforcement officers from several local, state and federal agencies lacked clear leadership, basic communications and sufficient urgency to take down the gunman. It found that in the absence of a strong incident commander, an officer from another agency could have — and should have — stepped up to the task.

One speaker Monday alluded to the 1970 school walkouts in which Mexican American students in Uvalde demanded equal education to their white peers. The resident of the predominantly Hispanic city questioned if Department of Public Safety officers who responded to the scene saw the victims as important.

“I can’t help but wonder if DPS didn’t think our children were worth saving,” the woman told the school board, noting the dozens of troopers in the auditorium providing security at the Monday meeting.

Vicente Salazar, whose granddaughter Layla Salazar died in the shooting, told the school board that it “hired trash,” referring to the school police department.

Javier Chavez, the cousin of 10-year-old shooting victim Amerie Jo Garza, said as he sees how officials are responding to the shooting, he loses “that much more” respect for the superintendent.

The committee’s findings echoed weeks of criticisms by law enforcement experts and Uvalde residents of the police response which they say did not align with the accepted doctrine across law enforcement that officers immediately confront active shooters. A video obtained and released last week by the Austin American-Statesman and KVUE-TV, viewed and reported last month by the Tribune, showed officers’ inaction while children in two classrooms were being killed.

Gov. Greg Abbott on Monday called the House committee’s findings “beyond disturbing” and said there are critical changes needed as a result. DPS said Monday that it launched an internal investigation to determine whether its own officers violated agency standards during their response to the shooting.

Residents also criticized a lack of security measures at Robb and other schools and peppered officials with questions about their plans for increasing safety before another school year starts. The school board was scheduled to vote later Monday on delaying the start of school so it could increase security at campuses but they adjourned without taking such a vote after the open forum ran late.

As parents continued to ask questions and criticize officials’ response to the shooting, school board members on the stage kept their responses to a minimum, repeatedly promising residents and parents that their concerns would be addressed.

This article originally appeared in The Texas Tribune at https://www.texastribune.org/2022/07/18/uvalde-school-shooting-parents-officials/. 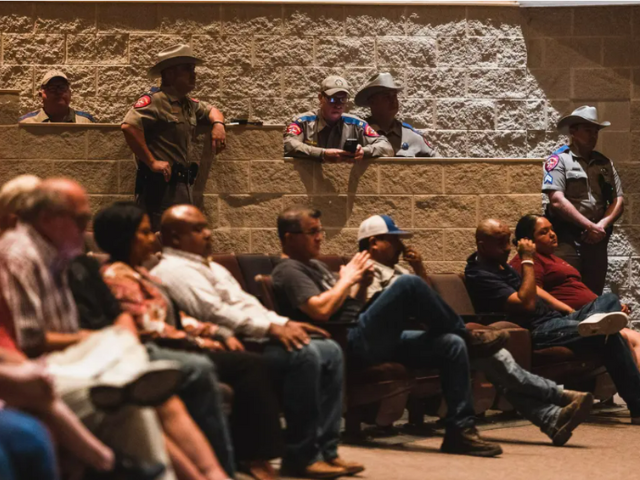