By Jason Beeferman, The Texas Tribune

UVALDE — As in many small Texas towns, law enforcement officers here eat free at local taquerias on some days and get complimentary haircuts at neighborhood salons on others. Residents say increased activity from cartels trafficking drugs across southwestern Texas has made them increasingly reliant on Border Patrol and the county sheriff’s department for safety.

In a tight-knit community where Border Patrol, police and state troopers are recognized not just as heroes — but as cousins, aunts and uncles — the steadfast support for law enforcement in Uvalde has quickly become complicated.

Some first responders are facing intense scrutiny and mounting criticism — from state officials and the American public — over what is largely perceived as delayed reaction last week to the deadliest school shooting in Texas history.

[“This is not us”: Tight-knit Uvalde, rooted in Texas history, navigates incalculable grief]

After an armed gunman went inside Robb Elementary, Pete Arredondo, chief of police for the Uvalde Consolidated Independent School District, made the call to wait for backup before officers went in to confront the gunman — something Texas Department of Public Safety Director Steve McCraw admitted was “the wrong decision, period.” Inside the school, the gunman killed 19 students and two teachers and injured 17 others.

It took officers over an hour after the shooter went inside to kill the gunman, during which time distressed parents gathered outside the school and begged police officers to enter.

The conservative community is now grappling with the need to square its “back-the-blue” values with law enforcement decisions that have raised serious questions about whether officers’ choices cost the lives of innocent children, delayed vital medical assistance to wounded elementary students and subjected surviving children to over an hour of traumatizing confinement with a murderous gunman who said things like “It’s time to die” before each kill, as one student survivor told San Antonio TV station KENS.

“It’s all over the world,” resident Donald Limon, 64, said of public reaction to how the incident was handled. “Everybody knows, everybody’s saying the same thing: ‘Why were they standing outside?’ ‘Why didn’t they go in?’”

Limon, a landscaper who has been in Uvalde for more than five decades, said his friends are part of the city police force and he also knows Arredondo, who was elected to Uvalde City Council earlier this month. But Limon thinks last week’s massacre may be a turning point for the town’s relationship with police.

“A lot of people are upset,” Limon said. “I think everybody’s opinion is gonna be changing.”

Not everyone agrees. In Uvalde, finding fault with law enforcement doesn’t come easy. Backing the blue is a familiar reflex in a conservative town like Uvalde, but the support of law enforcement is emboldened by the fact that Border Patrol and state agencies are crucial to protecting Uvalde residents from the rising criminal activity caused by the town’s proximity to the border.

Still, for many residents, the mistakes of Uvalde police the day of the massacre are clear, and they prompt a necessary yet uncomfortable criticism of a once-beloved police force. And for others, area law enforcement organizations were already seen as discriminatory.

The full scope of the police response — including exactly how many officers were on the scene, which agencies were present and what their roles were — is still unclear. But the U.S. Justice Department has already launched a review, which will “provide an independent account of law enforcement actions and responses.”

The only voices that haven’t prominently entered the conversation are those of the people whose loved ones make up the 21 slain students and teachers. Grieving people, including parents and siblings, will spend this week saying goodbye in a series of funerals that are just beginning.

When Limon was growing up, the cops knew everyone by name. He remembers going to local dances and drinking, and the cops escorting everyone as they drove home just to make sure they got back safe. While he doesn’t think officers do that anymore, the deep relationship between Uvalde police and its residents — many whose families have lived in Uvalde for generations — is fostered and strengthened by memories of town police as caring, personal and familiar.

“Basically they’re all good cops,” said Limon, whose grandson attends Robb but stayed home the day of the shooting. “I don’t know what happened Tuesday. It’s like everybody froze or something.”

Juan Martinez, 66, was born and raised in Uvalde, and his family has been there for over a century. He’s the owner of Town House Restaurant, a Tex-Mex diner on the east side of town that serves chicken fried steak, catfish, and onions and calf liver. Residents pay at the counter.

“I think we have a pretty close tie with the police department,” Martinez said of Uvalde. “They’ve always been there for us, helping us out for whatever comes up.”

Through his time at Town House and growing up in Uvalde, Martinez has embedded himself in the community. He knows many Robb families, as well as the gunman’s family. The shooter’s great-uncle used to do bookkeeping for Martinez, and his grandfather has eaten at his restaurant for years.

Martinez said he had heard that “they’re trying to pin a lot of the decisions” on Arredondo, his friend, which he found upsetting.

Martinez said he saw the viral videos of the desperate parents trying to get past the police. A state lawmaker told The Texas Tribune that DPS troopers restrained two parents who tried to reach their children. Parents also reported being hit with Tasers and handcuffed by law enforcement officers at the scene.

While the cops were being “a little harsh” toward the parents, Martinez said, the tight relationship many residents have with Uvalde law enforcement is unlikely to change.

“I don’t think that people can get against the police because they’re always there to serve you anyway,” he said. “If they made a bad decision, that’s going to have to be explained, I guess.”

The remedy for recent crime

The support of law enforcement includes backing Border Patrol, a major employer in the predominantly Latino city and county. Uvalde sits between the border town of Eagle Pass and the state’s second-largest city, San Antonio.

Residents of Uvalde, white and Latino alike, are quick to talk about how the illicit drug trade from Mexico, along with federal border policies they describe as lax, create problems for the community. While car doors were once left unlocked and screen doors unlatched, Uvalde today is a place “where you have to be a little bit more cautious,” Martinez said.

Ranchers and farmers describe fences and gates torn up and broken into by individuals they identify as Mexican cartel members, sending cattle and livestock deep into neighbors’ property and causing costly, often futile repairs because the fences just get cut again. Other residents cite car thefts and even abduction attempts.

“We have a big problem with the border,” Martinez said.

Frustrations about cartel-related crime, residents say, are why they increasingly support, and rely on, Border Patrol, the county sheriff and law enforcement as a whole.

“I’ve talked to a lot of people, and I haven’t talked to anybody who is mad at law enforcement,” 71-year-old Jeff Jacques said three days after the Robb massacre.

His wife, 86-year-old Anne Jacques, agreed. She said it’s not fair to criticize the police given the difficulty and complexities of the situation.

The couple pointed out that Uvalde is a small town, and while the school and city police departments have received training for active-shooter situations, it’s something they rarely, if ever, encounter.

Jeff, who is white, scoffed at the idea that the people of Uvalde, as a whole, would grow angry with the police.

But the town’s majority-Latino community has varying opinions of law enforcement.

“It's a mix, truly mixed,” John Castro, 17, said of his community’s views on law enforcement.

Border Patrol offices often glare at him and his Latino friends accusingly, he said, and stop them asking to see IDs or papers.

Still, it’s not right to cast judgment on Uvalde’s law enforcement in the wake of the shooting, he said: “At the end of the day, they did risk their lives as well.”

Limon, the landscaper, said he’s experienced profiling recently from state troopers who pulled his truck over and searched it every time he crossed the Uvalde County line when traveling to nearby La Pryor. Every day he would go back and forth, and almost every day they would pull him over.

It would be the same officers every time, Limon said. They would search his truck, sift through his toolboxes. And if he were a white man, they probably wouldn’t pull him over, he said.

“They might stop you once [if you were white],” Limon said. “But not every day.”

As the picture of law enforcement officers’ response to the shooting becomes clearer, some in Uvalde are becoming more critical.

Alex Covarrubias, a resident of Uvalde for more than 25 years, said he raced to Robb when the shooting happened and witnessed first responders carrying out wounded children. He said Uvalde law enforcement needs to work on rebuilding trust with the community. In the meantime, he called for the officers responsible for the delayed response to step down.

“That’s your job. That’s what you signed up for,” Covarrubias said. “You gotta be prepared. … There’s no excuse.”

Gov. Greg Abbott initially praised the law enforcement response but said Friday he was “misled” about what happened in the school massacre, causing him to initially share inaccurate information with the public.

“I am livid about what happened,” Abbott said during a news conference in the town.

The Justice Department has since launched its inquiry. Outside Scared Heart Roman Catholic Church before Sunday Mass, 64-year-old Juan Antonio Santos said he believed that only God could comfort a community in collective grief. Still, he also wants accountability; there needs to be a full investigation into the shooting, he said.

Joshua Fechter and Brian Lopez contributed to this report.

This article originally appeared in The Texas Tribune at https://www.texastribune.org/2022/05/31/uvalde-school-shooting-police-response-reaction/. 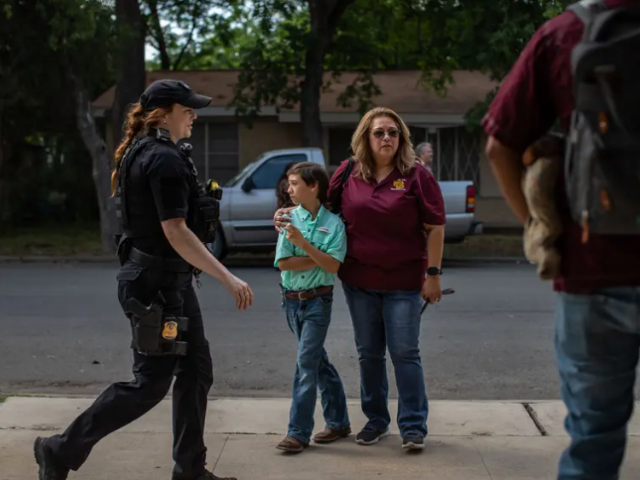