San Antonio organizations and elected representatives are responding to Gov. Greg Abbott’s withholding state grant money his office administers to Travis County due to the county jail’s policy regarding immigrants.

The governor’s office announced Feb. 1 it was canceling all activist Travis County criminal justice grants. To date, the state has given the county $300,000 of the scheduled $1.8 million, resulting in a $1.5 million shortfall.

Abbott’s actions were revealed as Sheriff Sally Hernandez imposed a new policy to help federal immigration officials: detention of only inmates who are charged with murder, sexual assault or human trafficking.

On Jan. 31, during his state of the state address, Abbott declared an emergency ban on Texas cities calling themselves sanctuary cities or safe havens for undocumented immigrants.

Hernandez told reporters in a Feb. 1 press conference that she is following federal and state laws. Travis County Judge Sarah Eckhardt spoke out on Wednesday. In a letter released to the media, she expressed confidence that the sheriff was acting within existing law.

“I am certain you have come to the same conclusion; else you would not be seeking to change the current state law to put all Texas sheriffs in the service the United States Department of Homeland Security,” Eckhardt wrote.

None of these funds are allocated to or administered by the Travis County Sheriff's Office. Instead, they are spent on family drug treatment court, family violence prosecution and victim outreach programs, and veterans court.

it’s been a few days of controversy since President Trump issued an executive order, calling for restrictions on immigration, especially on individuals from specific countries in the Middle East and Africa.

U.S. Rep. Joaquin Castro on Jan. 31 called for a Congressional investigation if the Trump administration ordered the U.S. Customs and Border Protection agency to ignore judicial stays against his refugee travel ban. Watch Castro's statement in the video he released below.

People opposing the travel ban rallied at the state capitol and in other places to voice opposition to the travel ban, saying President Trump is targeting Muslims. MOVE San Antonio organized a rally against the immigration order. See NowCastSA’s video of that event, held Jan. 29 at Main Plaza, below.

Meanwhile, Texas state legislators are having a hearing Thursday, Feb. 2, on the proposed Senate Bill 4, which would require local law enforcement officers to ask arrested individuals for their immigration status. State legislators this week called for expanding the bill to include college campuses. The bill would carry penalties against agencies and institutions that do not cooperate with federal immigration officials.

Members from "United We Dream" organization stood on the southern steps of the Texas Capitol and held a press conference in addition to giving personal testimonials against the new legislation. View the video from their press conference below.

View an additional photo gallery from the SB4 protest below. 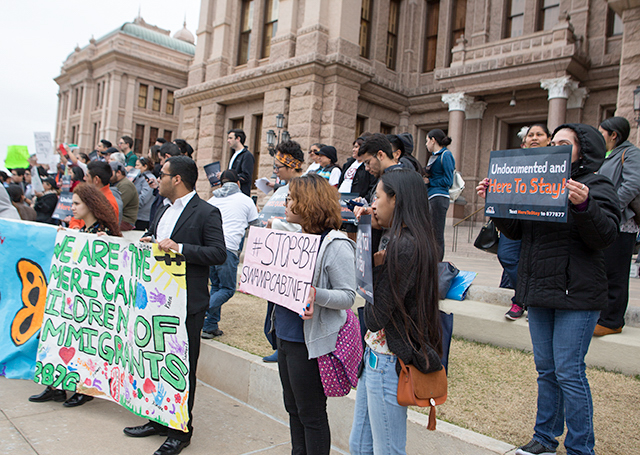 University of Texas at San Antonio Downtown hosted a town hall on Jan. 26, when Police Chief William McManus said his department is enforcing existing laws to keep all criminals off the streets. He and another panelist, State Rep. Diego Bernal of San Antonio, disagreed with the intent of Senate Bill 4. See the video of the town hall here.

Lawyers and staff members with Refugees and Immigrant Center for Education and Legal Services will gather at the Esperanza Center for Peace and Justice 6-8 p.m. Feb. 2 to discuss implications of Trump’s executive order.

After midnight Feb. 3, the state Senate Committee on State Affairs voted 7-2 - along Republican Party lines - to approve Senate Bill 4, despite plans to hear more public testimony later Friday. The full state Senate is to consider the anti-sanctuary city bill the week of Feb. 6.

While the Texas Legislature cannot pass legislation within its first 60 days of a new session. Gov. Abbott called sanctuary cities one of his emergency priorities in his State of the State Address last week, encouraging the GOP-dominated Senate to fast-track the legislation.

Democratic state lawmakers derided the Senate Committee decision on SB 4. San Antonio State Rep. Diego Bernal (District 123) tweeted: "The sanctuary city bill is not about cities and police 'just following the law.' If so why do we need a new one? This is politics and fear."

"Unmoved by the Dreamers expressing their love of Texas, this nation and the liberty we enjoy; by the children who fear that their parents won't return home from work; by the Texans whose parents immigrated here to escape grinding poverty, violence and persecution; by the law enforcement officials who implored the committee to respect their autonomy," he added.

**Cover Image: Students from the "United We Dream" organization stand on the southern steps of the Texas Capitol during the SB4 hearing on Feb. 2. 2017. Photo by B. Kay Richter. 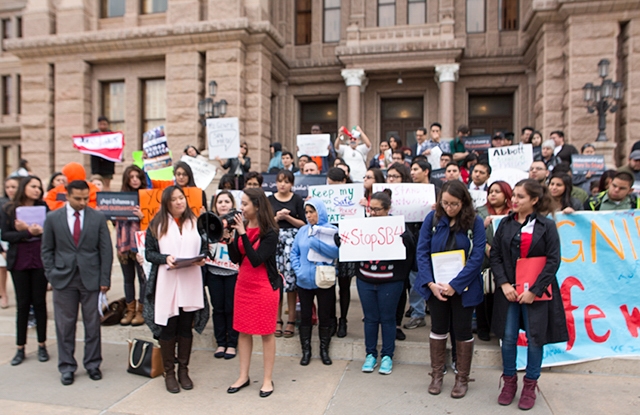