A Mennonite Church in San Antonio has become a living nativity scene, sheltering hundreds of refugee mothers and children who fled violence and poverty in Central America.

Immigration officials delivered more than 500 asylum-seeking women and children to the church after a judge in Austin ruled that Texas could not license the detention centers where they were being held as child care facilities. The refugees were delivered in waves, some arriving at 2 a.m. Monday in a driving thunderstorm.

The Interfaith Welcome Coalition, a network that welcomes refugees and RAICES, which provides legal services for refugees, are asking the community for donations of money, winter clothing, new underwear and socks, quiet non-battery children's toya and other items to help the women and children. Update: You can donate directly to the Interfaith Welcome Coalition at this site.

Volunteers, including doctors, worked around the clock to help the women and children. One young mother was so ill when she arrived that she was hospitalized Sunday night. She was expected to recover soon and be reunited with her baby son.

Nearly all of the women made the dangerous journey from El Salvador, Guatemala and Honduras expecting to join family members in cities across United States. Instead, they were detained by Immigration and Customs Enforcement, or ICE, and held for weeks or more in privately run prisons in Karnes and Dilley, Texas.

“It speaks to the character of the women who made that journey that they are here with us.” said Jennifer Hixon, who is managing the influx of refugees for RAICES and the IWC.

Spanish-speaking volunteers are working nonstop to re-connect the refugees with their relatives and make travel arrangements.

Needed items listed on this Amazon wish list are prepaid phones to help in that effort.

Since 2014, thousands of asylum-seeking women and children from Central America have been detained by ICE and held in privately run prisons in Karnes and Dilley, Texas. When they are released, ICE makes travel arrangements for the refugees and drops them off in San Antonio, near the bus station or at a home operated by RAICES near the Mennonite Church. (Hear the mothers’ first-person stories about conditions in the private prisons in this NOWCastSA’s documentary http://nowcastsa.com/blogs/asylum-seeking-mothers-family-imprisonment-texas )

In 2015, A federal judge in California ordered the children released, saying their detention in an unlicensed facility violated a long-standing prohibition against imprisoning children. (See New York Times article here. )

At the behest of the federal government, the Texas Department of Family Protective Services offered later that year to license the private prisons as if they were child care facilities. Because the buildings are configured as private prisons, the DFPS said it needed several exceptions to its normal rules. According to court documents, the exceptions to TDFP’s rules would have allowed more than four occupants to a room, allowed children to be in rooms with unrelated adults, and would have allowed older boys and girls to sleep in the same room.

In court hearings challenging the licensing, experts testified that they had “grave concerns” about the children’s safety under those conditions. In a Dec. 2015 letter to the the Department of Family Protective Services, the Texas Pediatric Society said the agency should not license the prisons, and instead should use its authority,  “to investigate and inspect the facilities for instances of child abuse, neglect and exploitation in accordance with the Department’s mission.”

In her ruling at 4:22 p.m. on Friday Dec. 2, 2016, Texas State District Court Judge Karin Crump denied the state’s request for a rule with special exceptions. Licensing the private prisons under those criteria, Crump wrote, would “contravene the Texas Human Resources Code and runs counter to the general objectives” of the code, which is designed to protect the health, safety, and well-being of children.

Hixon said ICE began bringing busloads of women and children just hours after the judge’s decision. By the end of the weekend, more than 500 refugees had arrived and hundreds more are expected in coming days. 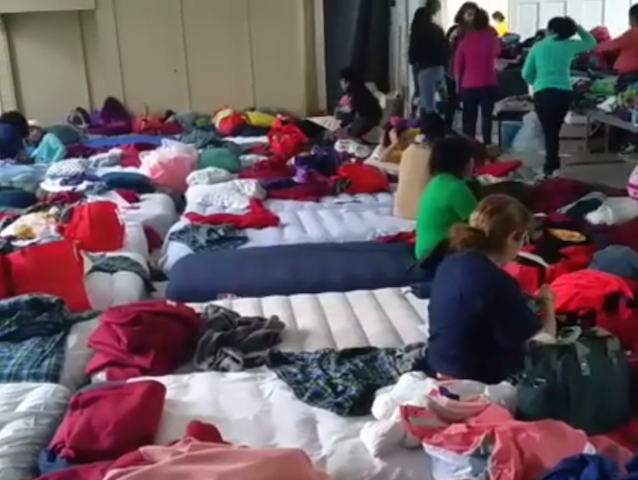