With cheers and tears, students from the University of Texas at San Antonio celebrated passage of the DREAM Act in the House, a vote that resounded from Washington as community leaders met here to plan for the future in SA2020.

Many of the UTSA students who have been on a hunger strike since Nov. 10 to push for the legislation were attending the community meeting that Mayor Julian Castro hosted at St. Mary's University.

Several hundred people from different sectors of San Antonio society were huddled writing and rewriting vision statements to make San Antonio a better place to live when news of the vote spread at the university's Bill Greehey Arena.

There was an uproar of jubilation among many attendees, including Mayor Julian Castro and St. Mary's University President Charlie Cotrell, who agreed the vote gives the legislation momentum as it heads to the Senate Thursday, when it faces a much tougher battle.

Besides the mayor, the forum was hosted by SA2020 Tri-chairs Graham Weston, CEO of Rackspace, Darryl Byrd, CEO of Pearl and Sonia Rodriguez, Chair of the Mayor’s Commission on the Status of Women.

Castro launched the SA2020 initiative in September, asking San Antonians three questions: What do you like about the city, what don’t you like, and what would you like to preserve?

More than 3,000 people responded in surveys that the city mailed out. So far, the priorities of San Antonians are improving education, creating better jobs and preserving the city’s unique cultural and historical heritage.

The next and final forum is scheduled for Jan. 22 at the TriPoint YMCA. 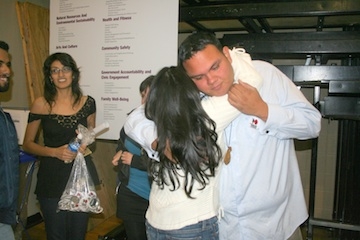