Updated: After hearing testimony from 26 residents, the San Antonio Zoning Commission voted 6-1 on May 17 to deny a request by Tobin Hill North neighbors to be designated a Historic District. The move also rejected the recommendation by city staff that the panel approve the historic designation or grant a continuance.

The rejection came seven months to the day after homeowners formally sought Historic Designation to keep developers from erecting incompatible structures in one of San Antonio’s oldest urban neighborhoods. The issue now moves to the San Antonio City Council. (We will update this story when the City Council vote is scheduled.)

Most of those who testified were in favor of Historic Designation, including Cynthia Spielman, president of nearby Beacon Hill Area Neighborhood Association which has seen high-density, out-of-character development inelegantly wedged between century-old, single-family homes.

Watch complete video of the 90-minute discussion and the commissioners' vote here. Scroll down for links to jump straight to key points in the video.

Rick Shell, who owns a home on East Mistletoe, opened the hearing by telling Zoning Commissioners they would be hearing  support for the Historic Designation from “long time residents who lived here their entire lives and have family in the neighborhood.” He said the panel would hear support from surrounding neighborhoods, “because they see the need for us to stand together against unchecked development.” (Go to the start of the video to hear his statement and 19 others.) (Click here for a story and video from a contentious meeting April 4 with residents, representatives from the city and the District 1 councilman.)

Cynthia Spielman, president of the Beacon Hill Area Neighborhood Association said San Antonio’s “downtown neighborhoods are experiencing unprecedented stress as we move into the future. These neighborhoods, established in the early 20th Century, are unique and once gone, they cannot be replaced.” Denying the request, she told the commissioners, “will have a chilling effect on all neighborhoods." Click here to watch her full comments: https://youtu.be/UbBziSpUvCA?t=14m8s

Click here https://youtu.be/UbBziSpUvCA?t=1h10m17s to go to the point in the video where Zoning Commissioners had questions for the city staff.

Click here https://youtu.be/UbBziSpUvCA?t=1h22m32s to go to the point in the video where Zoning Commissioner comments about the case.

Here are partial transcripts of the Zoning Commissioners’ comments:

Commissioner Diaz-Sanchez: “I have several comments. I am deeply disappointed in the way this process, the way it happened in several months, the fact that the office of historic preservation has not been presented us an update of the percentage in favor or opposition … to not have a real. It’s become a real challenge … using the UDC process we discussed that the NCD can be more restrictive - a lot of people in … NCD has the ability for the community to author the restrictions. OHP has led the charge - disappointed … lot of controversy been lack of communication. I understand frustration don’t want a continuance … wish there had been a lot more transparency on where the boundary lines were drawn and communication.”

Commissioner Garcia: “I agree. I am very disappointed in Office of Historic Preservation... I am in support, I think it is a good idea in this particular area for Historic Designation. I feel like it would be very helpful to this street and this community see the benefits of it, however I feel like the process has not been a good one, there are so many people here who are not in favor… It seems that the community is saying they don’t want it. Did not attend community  meetings and now I a sorry I didn't. I will not vote in favor of continuance, having a very hard time as much as I am in favor of Historic Designation in this area  I feel like I cannot support it at this time.”

Commissioner McGhee: “I am disheartened a little. I agree with fellow commissioners that whole process, there were some lost opportunities … It’s hard to assess with the information that we have. My heart still is truly breaking... I think this neighborhood is a jewel with all its character. I heard misconceptions and misinformation over and over again, I guess because people didn’t understand whole picture. It would just be a loss if we just left it open for developers to do whatever they want - it would be so sad for me. I will wait for a motion.”

Commissioner Head: “There seems to be a lack of communication out there, on the other hand, would not be support. I for one believe it would be a good thing to keep developers from coming in, but feel like at this time the area needs to have all the information necessary to make a good decision.”

Commission Chair Romero: “I’m not going to support a continuance. I’m surprised (city staff) even asked for a continuance today after neighbors sitting here today for five hours… I don’t know where this idea came from -  Cathy (Hernandez) you have been working your heart out… I  wonder why our Historic Preservation Officer is not around for really big cases,... this is important stuff for the city -- to always have the staff be to hit down. Aside from all that — these cases are heartbreaking it is a Zoning case but it is about Historic. We’re not experts in historic. I support Ms. Gonzales who spoke so beautifully. I think it should have historic designation, but then again, our own code makes it incumbent on a majority… you are gerrymandering  pulling out and in, uncomfortable about majority, then minority - you are trying to get over 50 percent … I’m not going to support a continuance — but if the commissioner requests support or denial, I could go either way with her because I really am at a tipping point on that.”

Click here https://youtu.be/UbBziSpUvCA?t=1h32m8s to see the motion to deny by Commissioner Diaz-Sanchez and the vote. What follows is a partial transcript:

Commissioner Diaz-Sanchez: “This is a challenge. I have been to the community meetings … I really cannot overstate disfunction due to communication … gerrymandering, not communicating to property owners … problematic. I will not be making a motion for continuance. It’s tough. Given all the conversation and contact - I’m make a motion for denial of zoning case.”

Editors note: As originally published, this article incorrectly identified Commissioner Grace R. Gonzalez as voting on the historic designation. She had left the meeting and was not present and did not participate in the vote. We sincerely regret the error. 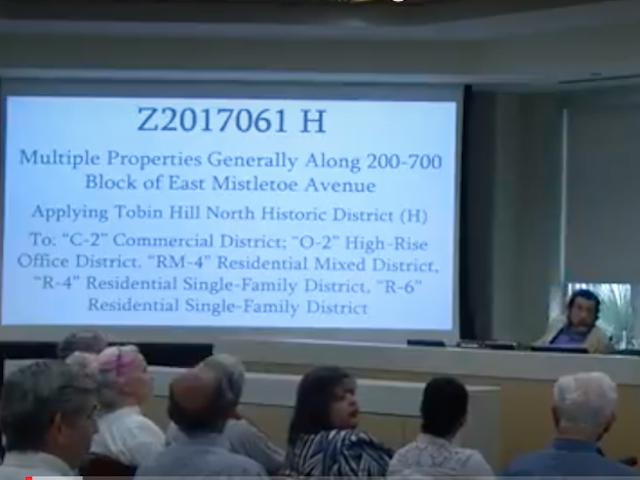