Replay video from the  District 2 Runoff Candidate Conversation with Jada Andrews-Sullivan and Jalen Mckee-Rodriguez. The two were the top vote-getters in the May 1 election and are facing off in the June 5 runoff. Early voting is from May 24 to June 1.

The forum was at the Ella Austin Community Center. Social distancing will be in effect and masks are required for all attendees. Those who are present at the community center will be eligible to win one of two door prizes and the first 25 people will receive SWAG bags.

The event will also be streaming live on YouTube so you can watch it for free from anywhere, right on this page.

Scroll down to see the questions from the Runoff Candidate Forum, then click on the link to jump to that spot in the video with the candidates' answer.

Q: Opening Statement from each candidate

Q: What will you do to protect vulnerable neighborhoods, urban neighborhoods, and legacy homeowners in encroaching development? Especially sacrificing and approving zoning from residential to commercial.

Q: What specific steps will you take to make broadband access available and affordable to all residents?

Q: What is one thing the city can do to increase transparency in local government or to better engage its citizens?

Q: Homelessness is a problem throughout San Antonio and in District 2. Give us three specific examples of things you will do to address this problem in your first six months on the job.

Q: What are your thoughts on climate change as it applies to the city, for example, the city’s climate action plan, solar panel incentives for homeowners, or is climate change something the city should not deal with?

Q: Ella Austin’s 10-year lease with the city is coming up and the measure is on the agenda for the May 20 Council Meeting. Will you support the new lease or not?

Q: What’s the best way for San Antonio to balance maintaining the character of East side neighborhoods while encouraging private investment?

Q: As a city councilperson, one of your responsibilities is to appoint people to boards and commissions, including the Zoning Commission and the Historic Design and Review Commission. District 2 has within its boundaries six historic districts and numerous designated landmarks which makes these positions critical. If you are elected, will you pledge to fill these seats with people who reside in the district and who have expertise and a passion for listening and learning?

Q: Now that Proposition A has passed, and bond dollars can be spent on things like affordable housing or economic development, on what types of projects specifically do you think those future dollars should be spent on?

Q: More people voted on both sides of Proposition B than voted for mayor. It is an issue that people feel strongly about. What will you do as a councilperson to make police more accountable?

Q: Currently the City of San Antonio relies heavily on neighborhood associations to get feedback about zoning and neighborhood changes, disputes have arisen between neighbors, and many feel not all voices have been heard with these rules, do you commit to work equality with District 2 citizens and neighborhoods and how will you ensure you equality represent all voices in D2?

Q: Did you or did you not support Proposition B? What did you base your decision on?

Q: District 2 has many infrastructure challenges, such as trash, broken streets, etc. What is your plan to improve the beauty, safety, and utility of District 2?

Q: In recent months administrations waivers by the Department of Development Services have been liberally granted. Will you support a robust effect to address this once the Unified Development Code task forces start meeting again?

Q: How will you ensure minority and black contractors are afforded the opportunity to be contracted for community projects?

Q: Miss Matlin Lee has lived on the East side for over 60 years, her whole life, she is committed to passing down her home to her children and feels strongly that the legacy of homeownership, once denied to her family, is a blessing and a responsibility. She is concerned about the lack of investment on the East side. When will it look like the North, South side, etc, bringing stores and business to District 2 is crucial to keeping District 2 money in the district. What will you do?

Q: How do you plan to reduce shooting in the area?

What is the biggest issue facing San Antonio, and how do you plan to address it?

Q: A number of city board positions that pertain to District 2 remain vacant. Once elected, what is your timeline to fill all open vacancies?

Q: What is your plan to address and update existing San Antonio Housing Authority housing that is poorly managed and  suffers from deferred maintenance? 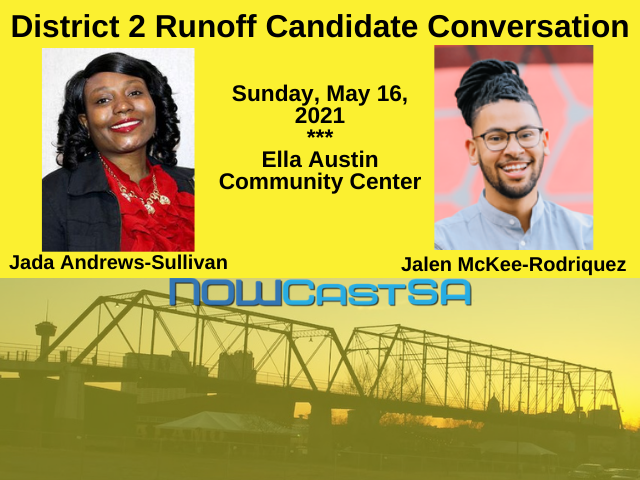