Replay NOWCastSA video from the Leon Valley Virtual City Council Candidate Candidate Forum  Oct. 7  which was moderated by the League of Women Voters of the San Antonio Area.

You can replay the video in its entirety or scroll down to jump to the spot in the video when the candidates answered questions from voters.

Here are the questions asked during the forum, with time stamps linked to that point in the video:

12:35- "There are 29 proposed charter amendments on the ballot. Do you have strong
opinions on whether those should be approved, or which ones should not?"

20:30- "If elected, what are your goals or vision for moving the city forward?"

23:40- "Leon Valley’s business community has been hurting for years as new businesses move to new neighborhoods outside Loop 1604. What would you do to improve conditions for successful business growth here?"

27:41- "Do you agree with a Boulevard or Parkway concept for Bandera Road with pedestrian and bicycle safe access?"

32:05- "As the pandemic continues, what is your philosophy and approach to how our city should operate going forward? Would you advocate remaining closed until COVID is eradicated or do you have a different approach?"

36:10- "Who do you think should set city policy, the City Manager, or the City Council?"

39:01- "Do you support the Red Light Program and the City Manager's decision to extend the contract until 2038?"

43:12- "How would you rate the performance of city staff, particularly the city manager and police chief? Are greater transparency and accountability needed?"

47:50- "Considering that under the city’s charter provisions, one councilor was removed last year, the mayor almost faced forfeiture earlier this year, and another councilor is in the midst of a forfeiture hearing now, will each candidate publicly commit tonight to respect citizens and the outcome determined at the polls by not initiating or taking action to remove their fellow elected council members throughout their term?"

51:56-"Where do you stand on or how do you plan to protect the LGBT+ community?"

55:22- "What is your position on allowing homeowners in Leon Valley to be allowed to use their homes for Airbnb or other short-term rental businesses while generating additional tax revenue for the city?" 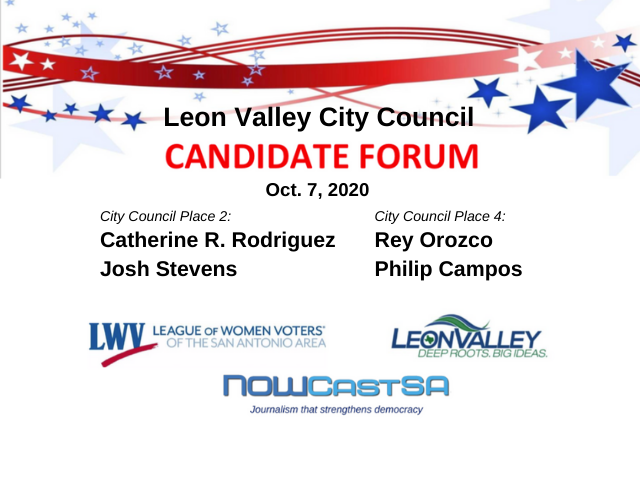