The Rev. Alfred Godley, a Gospel Singer Who Stretched His Voice Into a Shouting Happiness, Dies at 71 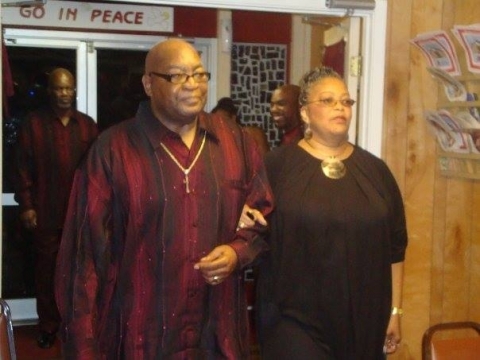 There wasn't any question that Rev. Alfred Godley could sing.

It came to him naturally. Godley was the product of a family of gospel and church music singers who were well known in San Antonio and Texas.

Godley was a member of the Shields of Faith gospel group for 24 years and a member of Quartet Association Local 62-2. He was also the assistant minister at St. Joseph's Baptist Church on San Antonio's East Side.

Godley died after a lengthy battle from a rare incurable case of leukemia, Saturday, Nov. 30, at the Veteran Administration's Living Facility. He was 71.

"Alfred loved singing and he loved to sing," said Rev. Godley's widow Marion Reed Godley, "and, I loved to hear him sing. He really used the gift that God gave him."

The Godleys would have celebrated their 42nd wedding anniversary, Dec. 21. Godley is survived by his wife of 41 years, Marion Reed Godley. Preceding him in death were his father, long-time famous quartet singer, Roy Godley Sr., who died in 2012, and his brother, Roy Godley Jr. Rev Godley is survived by two daughters and a son, eight grandchildren and one great-grandchild.

"Alfred lived up to the standard that he sang and preached about," said Lee Roy Owens of the Shields of Faith gospel group, which Godley belonged to for 28 years. "He sang hard all the time. He'll be truly missed."

His middle sister, Minister Mary Godley Steen, currently sings with the Sisters in Christ, and the younger sister, Norma Smith, sings with the Kings of Harmony Plus One. His oldest sister, Doris Haynes, was not a singer.

"When he got the call into the ministry five or six years ago from St. Paul Baptist Church on the West Side, I was the first one in the family he told," said his younger sister, Norma Smith. "He took that calling very seriously as well as his singing. If I needed anything, I could call him. He was that type of person and brother."

Godley, who did military stints in both the Air Force and Army, started singing at an early age with the Sensational Harmonizers, which featured his dad and brother.

"I remember when he would come home from leave from military duty, he would sing so hard and stretch it out into a shouting happiness," Smith recalls. "It would take four or five people to hold him down."

Godley, who also enjoyed working on cars as a mechanic, sang with several other local groups, including the Bright Clouds and the Gospel Highlights, before settling with the Shields of Faith.

James Bennett, founder of the Texas Jubilaires and music director at the Mount Calvary Baptist Church said Godley was an "awesome" singer. "He was a great first tenor and he could stretch it out to hit the extreme high notes. What I liked about Alfred is that he was very unselfish. He would help out other singing groups who may be missing one of their members. He loved gospel music, and he was a pretty good soloist."

"He was raised on quartet music," Bennett noted. "The entire Godley family, their children and grand-children can sing. Alfred was definitely one of the best in San Antonio, and he will be sorely missed -- especially in the quartet circles."

Owens admired Godley as a person. "I loved his spirit," Owens said. "He was family-oriented, and he loved his family and grandchildren. He gave his all -- all the way to the end."

The public viewing service for Rev. Godley is set from 2 to 7 p.m., Sunday, Dec. 8, at the Collins Funeral Home, 6867 Montgomery. Special viewing for family members will be an hour earlier.

Editors note: This story has been updated to correct information about his sisters. We regret the error.