Andy Sarabia, Whose Passion for Democracy Propelled COPS to Become a Powerful Force for Equity and Change, Dies at 78 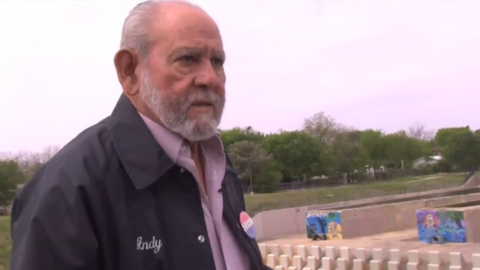 Replay video of the viewing, rosary, and funeral for Andres "Andy" Sarabia on May 13 and 14, 2019 at his parish, Holy Family Catholic Church.

Andy Sarabia died on May 3, 2019. The first president and co-founder of Communities Organized for Public Service, or COPS, Sarabia helped the organization become a powerful force for equity and change in San Antonio. He taught people how to participate effectively in democracy. His actions helped the community successfully advocate for new libraries, flood control projects and the creation of Palo Alto College. (Watch video of him describing those projects here.)

Many people attended Sarabia's rosary and publicly shared their memories and stories about this beloved community leader. During the funeral, Sarabia was eulogized by legendary community organizer Ernie Cortez. Click here to jump straight to Cortez’ eulogy in the video. Scroll down to read excerpts from the eulogy.

Watch the viewing and rosary here:

"If there was anything Andy Sarabia understood, it was how to be a citizen - not just as a voter, not just as a consumer of city services, but as someone who is about the business of teaching and learning and full participation in the life of that particular community. That's what COPS meant to him. COPS was his graduate school, his university. He never went to college, he didn't have to. He learned about politics, he learned about (Alexis) de Tocqueville, he learned about the Federalist Papers -- he used to teach the Federalist Papers to congregations all over San Antonio."

At another point, Cortez described Sarabia as a mensch:

"A mensch is a person of integrity, of honor, most of all who could be relied upon, who had people's back, they could count on you in thick and thin. Andy was a mensch."

Cortez concluded his eulogy by quoting the end of the Shakespeare play, Julius Ceasar, where Marc Antony says:

'This was the noblest Roman of all
'All the conspirators, save only he,
'Did that they did in envy of great Caesar;
He only, in a general honest thought,
And common good to all, made one of them.
His life was gentle; and the elements
So mix'd in him that Nature might stand up
And say to all the world, This was a man!'

"Andy Sarabia, may you go in peace" said Cortez. "The noblest Mexican of them all. This was an hombre!"

To see more about COPS/Metro, go to our special section by clicking here.