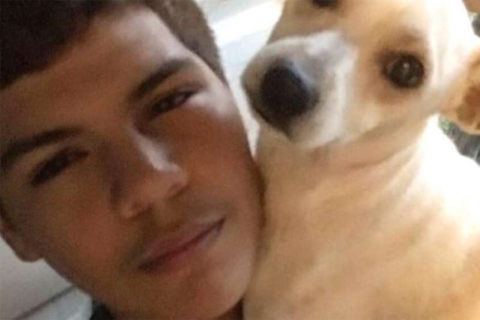 He took out the trash for the elderly neighbors in his apartment complex, he doted on his young nieces, his best friend was Oliver, the dog, who he had rescued from a Walmart parking lot, and he had been a staunch vegetarian for two years.

“He believed that animals had a soul and would say he couldn’t eat something that had one,”  said his mother, Ginger “Gigi” Brady, 45.

The youngest student at the Frank Tejeda Academy in the Harlandale Independent School District, Yanez was a gregarious leader. He was on the Student Council and already itching to fill out a college application, said his school counselor, Preston Adams.

Yanez was shot and killed in an apparently random drive-by shooting on Dec. 6, 2020 while walking Oliver near his home, blocks from Harlandale High School on San Antonio’s South Side.

Oliver was frightened, but not physically harmed. Oliver “was Angel's best man, his best friend,” said his mother.

Friends set up a Go Fund Me here to help the family.

Angel had some things in common with other teenagers, his mother said. He loved Baby Yoda, spent time playing video games and he was learning how to play the acoustic guitar. He particularly liked listening to the country song, “One Man Band,” by Old Dominion. She said he was always singing to tunes or humming wherever he went, especially with his young nieces, Alizaye and Raelynn Salazar.

His mother said her son was the kind of kid to go around their apartment complex and help out the elderly by taking out their trash. “He believed that God put him on this earth for a reason and that was to touch us and show us that there is love and how to show the love and spread it,” she said.

Yanez had transferred to the Harlandale ISD after attending Longfellow Middle School in the San Antonio Independent School District, where he was a member of the choir and theater arts and enrolled in the Leadership Officer Training Corps, or LOTC. 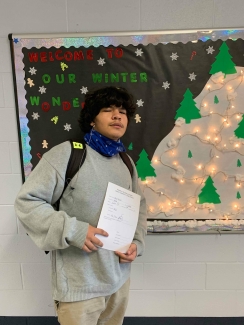 Harlandale staff immediately suggested Yanez should be enrolled in Tejeda Academy where he could graduate early, his mother said. She said her son talked about becoming a marine biologist or being a senator.

His school counselor recalled making an announcement over the intercom for juniors and seniors that prompted Yanez to come to his office and excitedly ask to fill out an application. Adams said he had to explain that the announcement was not for him, but another student with the same last name on campus. “He was so enthusiastic that he wanted to do his college application,” Adams said.

Yanez had been working hard to raise money for the student council through a door-decorating contest among staff members and teachers on campus, and had asked Adams to participate.  “After he passed, I realized I had to decorate my door really nice because this is something that he wanted me to do,” the counselor said.

Even though he had been on campus for only a few months, Adams said Yanez had a big and positive impact on the staff and students.

“He made so many friends so fast … he won over so many kids, they gravitated towards him,” Adams said, “He was a really good kid and we enjoyed having him here with us for the short time.”

On the Thursday before he was killed, Yanez had just received his first of the five credits needed to graduate from high school in three years.

He had recently started a job with the Young Entrepreneur Sales Club, or Y.E.S Club. The club was organized to help teens stay away from gangs, drugs and alcohol by keeping them busy with sales after school and on the weekends.

He sold chocolates door to door with “Coach” Omar Taha, who said the young man had the potential to be a public leader. “The way he spoke, it sounded powerful,” he said.

Despite only working with the club for a short period of time he had an impact on the kids working in the group, “Everyone gravitated to him because of his aura,” Omar said. “ He made everyone around him better...he made the group better than it was.”

Angel embodied the name his mother chose for him. “He always made everyone laugh. He always had a smile on his face and he didn’t have a mean bone in his body,” she said.

Besides his mother, Angel Yanez is survived by his sister, Gerardina Yanez, a brother-in-law, Joshua Salazar, and their two daughters.