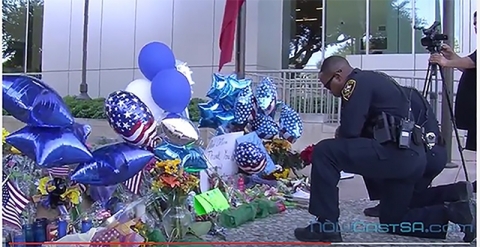 Law enforcement from around the nation joined family and friends of San Antonio Police Det. Benjamin Marconi on Nov. 28 to pay their final respects to the slain officer.

Marconi was shot and killed Nov. 20 as he wrote a ticket for a motorist close to the police department’s headquarters in downtown.

Police arrested Otis McKane, 31, the next day and charged him with capital murder. Marconi, a 20-year police veteran, was 50. He was the first San Antonio police officer to be killed in the line of duty in 2016.

A makeshift memorial developed outside police headquarters, filled with dozens of candles, balloons and cards. A sign that bore Marconi’s mugshot was adorned with personal tributes from coworkers and civilians. Watch a video of the makeshift memorial below.

A sampling of messages they left in memory of Marconi:

“Thank you so much for the service!”

“We are San Antonio!

“Praying for all law enforcement. May the lord protect you all brave men and women.”

“Thank you detective for your sacrifice.”

“Thank you for your service, from LAPD family.”

"Thoughts and prayers are with your family and SAPD. This is not who San Antonio is!”

“My heart goes out to the family. May you rest.”

“RIP Det. Marconi, thank you for your 20 years of service!”

On Nov. 28, a funeral procession began from Porter Loring Mortuary downtown. Many motorists stopped along roadsides and on bridges to pay their own respects as the procession continued.

The procession ended at Community Bible Church for a funeral Mass, which was attended by an estimated crowd of 3,000; including members of the public.

During the Mass, police Sgt. Michael Davis, who worked with Marconi in the department’s special victims unit, called Marconi a strong, faithful, calm person who loved his job and cared greatly for his family and colleagues.

“Ben cared for his brothers in blue like they were his family. And you know, we are his family. Ben is at a new roll call,” Davis said during the eulogy.

The San Antonio Police Officers Association has set up a memorial fund in Marconi’s name at Generations Federal Credit Union. Go to  www.mygenfcu.org/MarconiMemorial in order to make a donation.