Elvia Rios, a Stylish and Charming Mi Tierra Icon Since 1980, Dies at 72 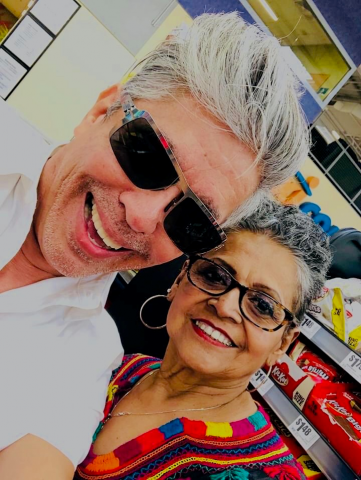 By Michael Quintanilla
Elvia and I met several months ago, while shopping at our Southside H-E-B, pre-mask-wearing, social distancing COVID-19 guidelines. There she was attired in her glorious, colorful dress of folkloric hot hues, her makeup on point — and tied around her tiny waist an apron almost used as a fashion accessory to her restaurant-chic look.
She took my breath away.
Then we simultaneously smiled at each other. She pointed to my hair in approval — and well, I melted and immediately switched lines just so I could be near this kind and gregarious woman. I had to meet her. Everyone, this stylish and striking woman is Elvia Rios. She told me on the day we met that she worked at Mi Tierra restaurant for 42 years.
She recalled that she was 30 when she started as a server and always took her job seriously. Each and every customer got treated like a five-star client, hoping each would return to her tables for her reliable attention and charm.
Did they, I asked? She smiled at me. “Wouldn’t you,” she said confidently. We both laughed.
The Mi Tierra Facebook page on Wednesday announced she had passed away. As Elvia and I chatted on line those months ago, she told me six years ago she was named a dining room attendant at the downtown restaurant. No doubt, thousands of diners knew, met and chatted with Elvia, and now, with this news. are saddened by her passing as I am.
Update: The viewing will be July 15 from 5 p.m. to 9 p.m. at Mission Funeral Home, 1700 SE Military Drive. The rosary will be July 16 at 9:30 a.m. with a Mass at 10 a.m. at Christ the King Catholic Church, 2610 Perez Street. The services will be streamed to an outside screen. People will be able to go inside, 40 at a time.
Elvia told me she greeted diners, checked in on them to make sure everything was great and that guests had the most wonderful experience at the historic restaurant in Market Square. In her colorful folkloric ensembles she cleverly put together with high-fashion flair — and her apron tying it all up — she worked the restaurant’s middle room, her dynamite personality, beauty and speed drawing in customers while she managed to keep an eye on everyone — and their individual needs.
As she loaded her groceries on the conveyor belt the afternoon we met, she told me she could be a little tough on the staff — and that they knew it — but they also knew she loved them. She said through the decades of restaurant work she learned the value in caring for people, being on time and making a good impression that begins with how one looks.
For certain Elvia dazzled me on the day we met, as she waited for me as I had my groceries checked out. We continued talking and laughing about all sorts of things that strangers come up with during a chance encounter. She asked about me. I told her I was extremely close to my Ma who died in 2017 and how six months later, my husband, Paul, had died. We had been together for 40 years. I told her I had been taking care of them because they were extremely ill.
She understood. We talked about our Southside love and all the traffic on SW Military Drive. I told her I was a reporter and how much I love writing and like her, talking to people, but mostly being curious which was why I soon asked about her makeup. It was intriguing to me. Secretly I was curious about her tattoo that was quite a revelation — and soon the joke was on me!
She told me that with an eyeliner pencil she drew a star on her right eyelid that looked like a tattoo. She said she was often asked about it because it was so perfectly painted — and it did look like a tattoo. She closed her eye so I could get an up close look. And I did. It was the tiniest, most perfect five-point star fake tattoo ever.
“Elvia, gurl, you’re an artist!” I told her. She giggled.
She said she had to keep up her makeup fake out — and soon it became her “thing!” Also her thing were her hoop earrings — and that gorgeous smile.She told me she loved her job so much, and at 72, as I mentioned, was strong even as she battled cancer; she was diagnosed with it three years ago but chemotherapy and support from her co-workers and family had helped greatly.
She was married three times and was in touch with Hubby No. 3 who often visited her at the restaurant, she told me.
What did she love about her job? “I love meeting people from all around the world and local San Antonians who come here because of tradition and culture,” she said that afternoon.
She said everyone who visited the restaurant was always in awe of its decor of explosive color and Mexican culture.
We left H-E-B together — love at first sight — and I helped Elvia load her groceries into her car, including a big watermelon. She was thrilled about that and applauded the generous gesture of the meaning of chivalry today such as opening a door, treating a friend to a cup of coffee or helping a new acquaintance load a heavy watermelon into the back of one’s car.
We hugged for a long time and told each other how sad it was to say goodbye and made a plan for me to visit her at Mi Tierra.I remember saying, “Elvia, you would have thought we were lifelong friends.” And she said, “Michael, in God’s way we are.”
Rest In Peace dear, sweet, beautiful Elvia, a legend at a legendary restaurant.
Author: Michael Quintanilla