Gidget Vasquez, Her Twin Sister's BFF and the Glue for a UTSA Department, Dies at Age 50 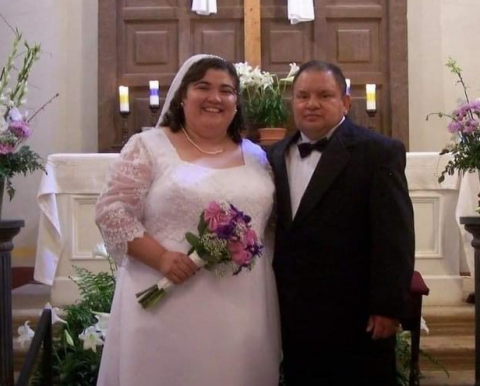 At age 18, Gidget Vasquez yearned to become a nun because she wanted to devote her life to the Lord by serving others and humanity. But there was just one thing that held her back from entering a convent, as she had planned to do.

“She knew that one day she wanted to get married,” said her twin sister, Geneva Vasquez Garcia of Austin.

Nevertheless, Gidget continued her mission to serve God and her fellow brethren of the world. A devout Catholic, she was a member of San Jose Catholic Church in Austin, where she dedicated more than10 years to the youth program, helping children come to know God, her sister said. She also took children to the Marion Conference during Pope John Paul ll's First Marion Youth Day in Colorado. Gidget even made pilgrimages to many holy places to pay tribute to her faith and to thank God for all her blessings.

For Geneva, the pain and grief of losing her sister, entwined by blood and heart and soul, is difficult to bear. It hurts, too, to know that Gidget, at 50 years young, still had so much more life to life and to give to others. She left all too soon, Geneva lamented.

She reflected on the sisterhood she shared with her twin. “It was awesome. We were instant best friends and partners for life.”

Born Jan. 15, 1970 in Austin, their lives were inseparable since birth and up until the day Gidget made her journey home. Even when Gidget moved to San Antonio to attend UTSA and settled in the Alamo City permanently, the two still saw each other often and were only a phone call away. Gidget loved going to the opera and plays, and Geneva was a frequent companion at her sister’s side.

“She loved to celebrate all kinds of family events, and we would call each other often to give our perspectives about events happening around the world,” Geneva said. “She was very smart and had an intellectual wit.”

She came to San Antonio in 1996 to attend the University of Texas at San Antonio, where she studied information systems. Later, she became an employee of the UTSA and was a senior administrative assistant, managing the office of the Department of Demography for the past eight years.

Lynne Cossman, dean of the College for Health, Community and Policy, shared the news of Vasquez’s passing in a Nov. 30 email to the college’s faculty and staff.

“It is with a heavy heart that I let you know HCaP has lost a member of our community to COVID,” Cossman wrote. “Gidget Vasquez spent the last eight years managing the office in the Department of Demography. In chatting with members of the department this morning, it became clear Gidget was so much more than an administrative assistant.

“She was the glue for the department - she celebrated its members’ successes and milestones with them,” Cossman continued. “Faculty birthdays were celebrated with cake. Holidays were honored with door decorations. She coordinated a department Thanksgiving lunch every year. She did these things because she cared deeply for the demography faculty and students as a part of her family.”

Former UTSA student Mauricio Rodriguez shared some poignant memories of Gidget and how she helped him navigate campus life and then some when he arrived from Mexico.

“I still remember my first day visiting the Demography Department,” he wrote in an email. “Gidget was there with a big welcoming smile. As soon as I walked in, and she found out it was me – the guy from Mexico, with all the questions about the application, visa and additional paperwork – she was so happy that I was finally in San Antonio. From that day I learnt that for Gidget, we were more than just students, we were part of her life. During my years in the program, she suffered with us during finals, she was happy when we were happy, she celebrated when we got our degree, but most important: she was always there for us.

“As an international student, Gidget was always my support for things that were new to me: from getting my Social Security number, learning how to use my insurance, going through the process to get hired by Universidad de las Americas Puebla. She was so careful and kind that she even tried her best to book the best available flights when traveling for conferences. She and Jose even offered me their home when I was struggling to find a new place to live.

“Every time I visited UTSA after my graduation, Gidget was always happy to see me. When she met my parents, she was so thrilled that all her Spanish went away. Gidget always kept in touch with me. In her last email, during the summer, she again offered her place for my next trip to San Antonio. I can’t imagine walking through the department’s door and not seeing Gidget there and her welcoming smile. She will be missed, but I will always cherish the sweet memories from the time I had the chance to be her friend.”

In 2006, Gidget met Jose, who was 10 years her senior. Nine months after dating, he proposed. “I said, ‘no,’ because I thought he was too old for her,” Geneva recalled with a laugh, “but she said yes anyway.” After tying the knot in 2008 at Mission San Jose, the couple settled in Poteet because they liked its small-town feel.

“They loved living out in the country. I called them ‘country bumpkins,’” Geneva said with a chuckle. “Jose liked all kinds of animals and helped show livestock to elementary kids. He would help repair neighbors’ fences because he liked to help the community.”

Meanwhile, in early November, Gidget and Jose fell ill and tested positive for the coronavirus. When their oxygen levels dipped to dangerous levels and had difficulty breathing, they were taken by ambulance to Methodist Hospital South in Jourdanton. Two days later, they were in critical condition. Despite both being given Remdesivir, convalescent plasma therapy and steroid injections, they succumbed to the virus.

Geneva said she is thankful she was able to see Gidget in her final days, but only through a window from outside her hospital room with other family members present, including their father, who played his guitar while they sang songs to Gidget.

“We’re in shock; she was so young,” Geneva said. “She said, ‘I’m going to be OK. We’re going to make it out of here.’ She even told us she was getting better. It makes you realize how precious life is, every breath we take.”

Sarah Sharmin, graduate student, recalls Gidget with fondness. "The last time I talked to Gidget was November 5, 2020. I was worried about some financial issues and immediately emailed her, and she not only replied, she called me to solve the problem. Gidget was known as a problem solver. I did not know that was the last time I would talk to her. I knew Gidget even before I was a student at the Demography Department. When I first met her, I still remember that smile; she was like I am no stranger to her. She asked me about my parents, my living here. Such an amicable personality. Later I joined the Department of Demography, and she was so happy as if her child got an admission.

"In my 2nd semester, she asked me whether I was thinking about a PhD. or not. When I said I love this department, but I wasn't sure yet. she encouraged me that I can do a PhD. I have my parents back at home, but her motherly advice helped me fill that void of parental love. This is not only I, if you ask every student, she was nothing but a supportive human being.

"Every time I will go to the department, I will miss the smile, and how she used to say, 'Hi Sarah.' This is painful that even if I want to talk to her I cannot. I can only pray and say, O Lord, Gidget was a name of candid, beautiful, supportive, hardworking, and kind soul. Keep her in a prestigious place where she belongs. Goodbye Gidget!"