John Thurman, who helped Disney and Kodak tie the knot, then made the San Antonio Rotary go global, dies at 77 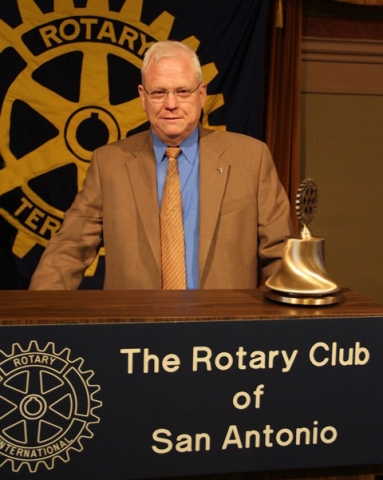 John Homer Thurman, Jr.,  who leveraged his business success to help countless others, died November 14, 2021 at the age of 77.

He was born in San Antonio, Texas to John Homer Thurman and Edith Horn Thurman.  He is survived by his wife, Carol Smith Thurman, and their daughters Christy (Keith) Miller and Annette (Whit) Runion.  He was beloved “PawPaw” to seven grandchildren – Alexander Runion, Evelyn Runion, Alison Miller, Emily Miller, Isabel Miller, Amanda Miller, and Dallan Johns. He is also survived by his sister, Velna (Don) Jackson of Stonewall.

Editors note: If you'd like to add your remembrance, please email NOWCastSA so we can add it to this article.

John was born and raised in San Antonio. He was a member of the Harlandale Baptist Church as a young boy where his spiritual faith began. He was a graduate of Harlandale High School, a member of the band, and in the Order of DeMolay. John was also a volunteer firefighter in Castle Hills. He attended The University of Texas at Austin where he received a BBA degree in accounting and was a member of the Delta Sigma Pi Business Fraternity.

After graduating from college, John followed his passion for photography and opened a camera store in Arlington, Texas. He met his wife of more than 51 years, Carol Smith Thurman on a blind date.

When an opportunity with Kodak presented itself to sell the store and go with the biggest photographic company out there, he seized the chance. His assignment with Kodak was Louisville, Kentucky. The Governor of the Commonwealth of Kentucky granted John the honor of Kentucky Colonel for his Kodak participation with the Kentucky Derby. While in Kentucky, John became a Mason.

He had 25 years with Kodak traveling all over the country teaching his customers the art of selling, customer relationships, winning many awards such as Kodak’s National Sales and Marketing Award five times.  John helped improve relationships between Disney World and Kodak’s involvement in Walt Disney’s theme parks worldwide. Locally, John was awarded the Partnership award from H-E-B for his outstanding service.

After retiring from Kodak, he formed Heart of Texas Realty in 1999 where he was honored as the Platinum Top 50 Realtor in San Antonio for ten consecutive years and helped countless families find and sell their homes. He mentored many and was endeared by the San Antonio Real Estate Community.

Having called on the military in five states with Kodak, his passion continued to improve relationships between the branches of the military and the San Antonio Military and Economic Affairs departments.

John was named an Emeritus Honorary Commander of the 37th Training Wing of the United States Air Force.

Never being shy or for a loss for words, John created and hosted five radio shows on the Salem Network Station. The most noted one was Movers and Shakers where he and Bjorn Dybdahl interviewed over 500 of San Antonio’s top executives.

He leaves behind many friends of all ages, joyfully accrued from living a long, rich life in San Antonio. The family especially wishes to thank the wonderful staff at Christus Santa Rosa Hospital for their kindness and care.

John will be cremated and his ashes scattered on his beloved  Lake Lyndon B. Johnson where he spent his childhood and adulthood years water skiing and entertaining family and friends. The family requests that, in lieu of flowers, remembrances be made to the Leukemia & Lymphoma Society and to the Shriner’s Children Hospital.