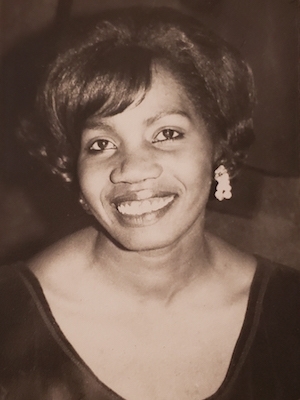 Leola “Doris” Wallace was a fashion designer and seamstress who had an unusual knack for taking just one look at someone and mentally recording their measurements to sew the perfect dress, pantsuit or any other outfit they wanted. 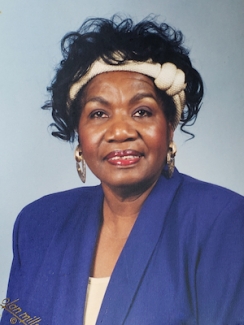 “Although she was pattern-trained, she rarely needed to use one. She had the gift for being able to make anything a customer wanted,” her daughter, Zenzi Ferrell-Lewis of Dallas, said.

“She could look at a Sears, Roebuck catalog and make all of our clothes, whether it was for school or Easter or any other occasion, just by looking at the pictures. When her sister would come down from Houston, they would spend all night sewing. She just loved sewing clothes.”

Wallace died March 21, 2020, she was 84. She was the first person in Bexar County to die from complications of the coronavirus.

Born on May 6, 1935 in Hempstead, Texas, Wallace was the sixth of eight siblings.

She attended Hempstead High School where she took home economics classes, which led to her interest in sewing. After graduation, she enrolled in classes at Prairie View A&M University.

One day, she decided to take a dance workshop at Texas Southern University and was smitten with the dance instructor, Allee Wallace Sr. They fell in love and were married on April 21, 1957.

Allee joined the Army that year, and during his service, the couple was stationed in Indiana, California and Germany before settling permanently in San Antonio when Allee was stationed at Fort Sam Houston in the 1970s.

Doris got a part-time position at the downtown Joske’s department store, working at the cosmetic counter. “She was an accomplished make-up artist and certified in fashion cosmetics,” her daughter said.

In 1979, Allee retired from the Army as a master sergeant while Doris earned her bachelor’s degree in fashion design from the University of the Incarnate Word. She opened her business, Designs by Doris, in a studio that Allee built in the backyard of their Meadowview North neighborhood home near the AT&T Center.

While operating a busy shop, she still found time to conduct workshops and mentor students in the Fashion Design Department at her alma mater, UIW. However, in 2006, Doris retired because of vision loss related to glaucoma.

In 2008, Doris was diagnosed with Lewy body dementia, and as her symptoms progressed, Allee became her sole caretaker.

“For the last 13 years, he did everything for her, cooking and taking her with him wherever he went,” Ferrell-Lewis said. “If he had to go to Austin to pick up some camera equipment, she was right beside him in the passenger’s seat.”

And even though she could no longer see, there is one thing that Doris and Allee still loved to do together: go fishing.

“He would take her to Canyon Lake or Corpus Christi,” Ferrell-Lewis said. “Even though she had dementia, when they would go fish, she was like a different person, and she could still reel a fish in. When a fish would tug at her line, she would say, ‘Whoa!’ and have a smile on her face.”

Doris was buried March 30 at Fort Sam Houston National Cemetery. A memorial will be planned later this year.

Survivors include her husband, Allee; daughter, Zenzi Ferrell-Lewis and her wife, Ginette Lewis; son, Allee “Turk” Wallace Jr. of Houston, as well as four grandchildren and six great-grandchildren. She was preceded in death by her siblings.

Correction: As originally published this article misstated Zenzi Ferrell-Lewis' last name in some instances. The article has been updated with the correct name. We regret the error.