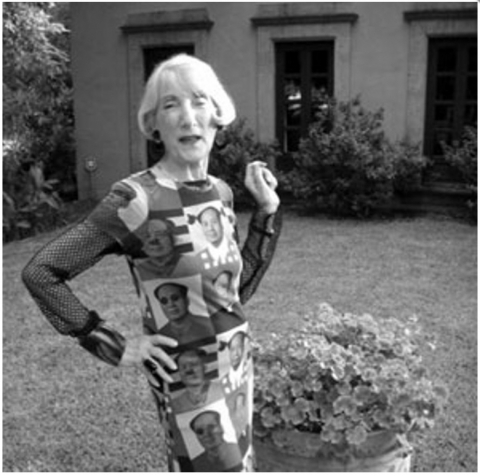 Polly Lou Livingston, whose claim to international fame was as the voice of the elephant Tree Trunks in the Cartoon Network’s animated series, “Adventure Time,” was also known as one of San Antonio’s style icons, said her son, Ben Livingston.

“She was a clotheshorse. She had the ability to dress herself in a way that people will never forget,” he said. “She taught me what beauty was all about.” 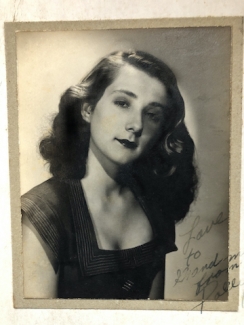 Speaking of her clothes, Ben is baffled over how in the world one of New York-based, Chinese designer Vivienne Tam’s infamous dresses from her 1995 “Mao” collection came to be in the fashionista’s possession, which Ben discovered in her closet and which she is seen wearing in a photo shortly after being cast as Tree Trunks.

“It’s a famous dress, and there aren’t many of them,” her son explained, adding that Tam’s collection includes humorous images of the late Chairman Mao of China. “One of them is at the Metropolitan Museum of Art in New York. It’s amazing that she has one and so does the Met. I don’t know how she got it. I believe it’s a $3,000 dress, and you can’t find them anymore.”

Polly Lou passed away January 24, 2021 at her home surrounded by her children, grandchildren, and beloved caregivers, Sonia Lopez, Dehlia Leija, and her sister, Idalia Leija. She was 91.

But for those who absolutely would love to own an article of Polly Lou’s clothing, among other treasures, her vast wardrobe – including the Vivienne Tam dress – will be sold during an estate sale March 18-20 at her home, said David Medford of Reliquarium Estate Sales.

“She had amazing fashion,” Medford said. “She had her own style, and she didn’t like to blend in.”

In addition to clothing, the estate sale will include fine jewelry, furnishings, such as a Scandanavian glass chandelier and art. For more information about the estate sale, visit www.estatesales.net or call Johnny Valdivia at (210) 849-9367 to make an appointment.

“I think there’s going to be a line around the block,” Ben said. “Everyone wants a piece of Polly.”

Born May 6, 1929 in Victoria, Texas to M.O. and Pauline Simon, Polly Lou enjoyed a childhood that has been immortalized in countless stories, including the one about her dog driving the family car down Main Street. Stories like this have been loved by all of those who were fortunate enough to hear them.

As Polly Lou grew up, she would accompany her “daddy” on buying trips to New York City for the family business, M.O. Simon Company, a department store in downtown Victoria. She met and mingled with famous designers - most notably Claire McCardell, who personally made Polly’s wedding dress, which is now housed in the permanent fashion collection at the University of Texas at Austin.

Moving ahead to 2014, Polly Lou was awarded best-dressed woman by the San Antonio Current. In an interview with the weekly publication, she said, “I was playing dress up before I was born.” Polly Lou married Bobby Livingston in the early ‘50s and they had two children, Carol and Ben, who they frequently referred to as the “other couple.”

A true artist in every sense with an intrinsic love of all things beautiful, Polly Lou easily fit into the art world. She recognized and introduced artists from all over Texas. From there, Polly Lou launched her ever-famous Art-Tea Parties. In true Polly-fashion, these became a huge sensation.

In the ‘80s, the Tea Parties morphed into Polly Lou’s grand achievement, Polly Lou’s Parties - a visual whirlwind of theatrical whimsy with every detail perfectly executed. Polly Lou collaborated with well-known artists such as Bill Wilhelmi, Ray Chavez, and Kevin and Cindy Jordan.

At the height of her career, Polly Lou was commissioned to create a Texas themed party for the Washington Project for the Arts in Washington DC. An old-time, neon-lit saloon with a saw dust covered dance floor was created, featuring well known Texas artists such as Bob Wade, Nancy O’Connor, Terry Allen and his Pan Handle Mystery Band and of course, the reigning Terlingua Chili Cook-off Champion.

A mechanical bull rode the train from Gilley’s in Pasadena Texas to Washington DC in order to complete the perfect Lone Star vibe. Among her many accolades, Polly Lou sat on the Dean’s Council of Fine Arts at the University of Texas as well as the Gala Committee for UT’s Center for the Performing Arts. 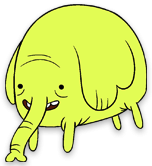 She played a sexy little green elephant named Tree Trunks. To say the series was a smash hit is an understatement, launching Polly Lou into global pop stardom.

“An energy and spirit as that of Polly Lou’s will forever remain in the hearts of all who have known and loved her,” Ben said. “She was a true Texas original and a very fine lady indeed.”

Even in her passing, Polly Lou has managed to maintain her celebrity status. Since an earlier obituary that Ben and his sister wrote went viral after Ward tweeted it, it has already been viewed by more than 1 million people, Ben said.

In another update, Ben said that the Board of the UTSA Institute of Texan Cultures has agreed to accept many of her possessions as part of their archives.

Polly Lou is survived by her daughter, Carol Magloff (and husband Stuart) of Canyon Lake; her son, Ben Livingston (and his wife Patricia Elias) of Austin, grandchildren, Spencer Magloff, Sarah Magloff, and Autumn Elias Kessler; her sister, Iris Rubin of San Antonio: nephews, Joe and Jamo Rubin; and her #1 cousin, Joe Cohn of Corpus Christi. Polly Lou is preceded in death by her husband Robert G. Livingston, and her parents, Pauline and M.O. Simon.

Polly Lou will rest alongside her family at the Evergreen Jewish Cemetery in Victoria, Texas where she grew up. The family is grateful for the outpouring of love and support. In lieu of flowers, please consider a donation in her name to Texas Performing Arts at The University of Texas at Austin or The Elephant Sanctuary in Tennessee.

Polly Lou's 2009 San Antonio Current interview about growing up in Victoria, Texas, her stagestruck mother, her party-catering days and life in the fledgling Texas art scene.