Rosa Walker Was a 'Pioneer...Who Defied the Status Quo' 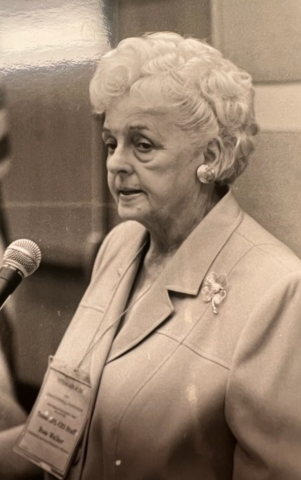 Rosa was 90 and long ago was inducted into the Texas Labor Hall of Fame. As the Texas AFL-CIO Director of Community Relations/Volunteers, Rosa oversaw conventions and many vital programs that benefited working families across the state. Her field work and fundraising during disaster responses drew notice throughout the labor movement.

As well-loved as Rosa was in unions, she also attained exalted status in the Texas Democratic Party and Democratic National Committee, bringing her labor organizing skills to political conventions, campaigns and other major operations of the party. Rosa’s office was an essential stop for politicians in any serious Democratic campaign.

My family took note of Rosa’s status as doyenne at the Texas AFL-CIO on multiple occasions. In 1995, my wife was very pregnant with Graciela and stopped at the office after a checkup. Rosa saw Enedelia was in discomfort, so she ordered then-President Joe Gunn out of his office to give Enedelia some sofa rest. The real point here is that no one thought that marvel was out of the ordinary.

At the 2002 Texas Democratic Party Convention in El Paso, my children got to lead the Pledge of Allegiance. Enjoying his backstage vantage point, Alejandro saw Rosa laying down the law to speakers on how much time they had and other logistics. He asked Rosa, “Are you in charge of the convention?” U.S. Senate nominee Ron Kirk, who was on next, responded: “She sure is.”

Rosa was a Hank Brown hire at the Texas AFL-CIO. Brown was an innovator and a champion of civil rights. His decision to make Rosa a Director had social significance in the 1960s, and she ran with the piece of her portfolio that cried out for elevation of women in unions. The labor movement reflects the times and, I believe, tries to improve on them, but make no mistake: Rosa faced barriers. Her incredibly hard work, winning personality and sheer force of will helped her either tiptoe around or crash through those barriers into the realm of indispensability.

Through the Coalition of Labor Union Women and through her amazing networks of active labor and Democratic women — Women get the job done! — Rosa built bridges to a better future. The Becky Moellers, Ceole Speights, Linda Chavez-Thompsons and Cheryl Elianos of the world, alongside countless others, saw the trails Rosa blazed and built on them.

I would be remiss if I failed to note that Rosa’s expansive mentorship very much keeps her legacy alive and extends to the Texas AFL-CIO current Director of Operations & Special Projects, Lee Forbes, who in her own inimitable style has preserved and expanded upon Rosa’s legacy (and whose title at last more fully captures a sense of the impressive geography of the job).

As a young Capitol reporter, I met Rosa at the Texas AFL-CIO before anyone else. I was looking for worker angles on stories and Rosa was the traffic cop, the human GPS to the right source and, now and then, the interviewee. (I also ran into her at the Texas Commission on Judicial Conduct, but in that context Rosa observed rules of confidentiality with integrity.) Rosa knew judicial races needed highlighting and It turned out the Texas AFL-CIO's own Executive Board’s vetting of statewide judicial candidates ahead of the COPE Convention was a great opportunity to gather quotes for roundup stories on statewide judicial primaries. News coverage of those meetings was not a tradition, but Rosa ran the traps that let me sit in on the meetings (and also warned the Board at the ahead of time that a reporter was in the room).

Years later when I was changing careers, Rosa was in the room during my job interview and asked me point blank if I was a Democrat (which reassured me that maybe I had not worn my affiliation on my sleeve as a reporter). Upon my hiring, we became fast friends. I benefited mightily from Rosa’s institutional memory and knowledge of the many moving parts in our organization, which is a polite way of saying that she helped me avoid land mines and occasionally had to explain to me how the cow ate the cabbage.

Rosa was as talented an organizer as I have seen; I’ll never forget the giant notebooks she kept for every convention and her emphasis on detail, punctuality and especially serving our membership.

I have known many strong women in journalism, labor and my family, but none who burst through the status quo that prevailed in her era more resolutely. As for Rosa’s mentoring, encouragement and personal kindness to me, I can only hope to pay those forward. What a great woman. When Rosa’s husband Boyce died, I cried; somehow, on New Year’s Eve, in this final cruel blow of 2021, I celebrated Rosa's leadership and her amazing life.

RIP, Union Sister. If eternity has a schedule, it just acquired one hell of an organizer.

“Rosa Walker was a pioneer in so many ways, a leader and mentor who defied the status quo to lead historic gains for women in the Texas labor movement and for all working people. She was a force of nature who wore many hats in both the labor movement and as a longtime member of the Democratic National Committee. For decades, if unions or Democrats were holding a major event, Rosa was organizing it. The officers and staff of the Texas AFL-CIO owe Rosa a tremendous debt of gratitude. She was also a dear friend. Today we offer our heartfelt condolences to Rosa’s family.”

Per Rosa’s daughter, Debbie Jennings, no services will be held because of the pandemic. A private graveside service took place at Cook-Walden Capital Parks Cemetery.

From an upcoming obituary: “In lieu of flowers, please feel free to donate to Hospice, the food bank in your area or the Texas AFL-CIO Scholarship Fund (P.O. Box 12727, Austin, TX 78711).”

(If you choose to donate to the scholarship fund, please note in the memo portion of your check that the donation is in memory of Rosa Walker.)