Shimi, a fierce feminist who used her body and her art to push boundaries 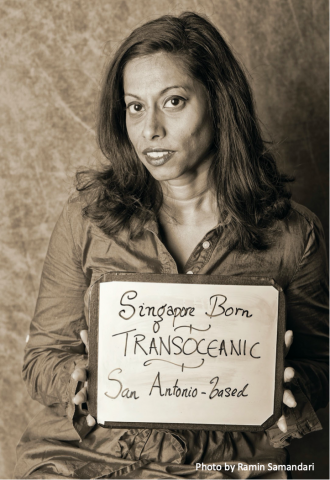 For decades, she was known to everyone who met her and loved her (and most who met her loved her) as “Shimi” – a word that captures both the iridescence of her personality and the fluid grace of her movement – but she was born Thanalakshmi Subramaniam, the first child of Subramaniam Thiruvengadam and Susila VIsay Lingham, on June 11, 1971.

Her childhood on the island city-state of Singapore shaped facets of her personality in ways both embracing and resisting – her love of the ocean, passion for Southeast Asian cuisines, commitment to academic excellence, but also her impatience with intolerance, and her insistence on her own free expression.

Upon finishing her secondary education at Raffles Girls School and Victoria Junior College, in 1990 she moved to the U. S. to attend Dartmouth College.

After graduating Dartmouth, Shimi came to San Antonio to intern at Jump/Start Performance Company and shortly thereafter met the love of her life, Oscar Alvarado, in 1995. This happy accident led to her building her life and legacy in San Antonio. They married in 1997, with their beloved dog, Darla, at their side.

Shimi became a company member at Jump/Start and ultimately its Artistic Director. By the time she left Jump/Start, she had an active independent performance career: belly dance, hoop, aerial silks, pole dance, and burlesque followed one after the other, with occasional provocative crossovers between them.

Oscar, Shimi and their dear friend Darryl Ohlenbusch lived in a converted former bar, the El Pacifico Lounge. “The Lounge” quickly became a venue for events such as “It Came from the Lounge,” featuring artistic and performance works by the trio, and, most famously, “The Miss Southtown Pageant” - an “all-gender” beauty pageant where contestants vied for the Miss Southtown title and the privilege of riding on the eponymous float during the King William Parade. Shimi’s joie de vivre was as important to these events as her professional theater and performance experience was essential.

A social justice warrior who “repped” for intersectionality long before the word became commonplace in academic discourse, Shimi advocated not just acceptance of racial, ethnic, religious, and gender diversity, but celebration of it. A fierce feminist, she found a way to use her body and her art to push the boundaries of sexual awareness and elevate the body as an instrument for both personal joy and transformation. On stage, Shimi was known by the name “Black Orchid,” a title that combines the beauty of Singapore’s national flower with Shimi’s conscious embrace of color.

Shimi was also an arts educator, working with children and young adults in numerous community settings. As a Wolf Trap Teaching Artist, Shimi trained annually, keeping abreast of the current practices and science behind education. Shimi provided residencies in arts integration across Bexar County, through The Institute for Early Learning Through the Arts, working one on one with teachers in their classrooms. She touched the lives of hundreds of young people and continued to mentor them personally into adulthood.

A prolific and powerful writer and scholar, Shimi recently resumed her own academic career by enrolling in the Literature, Creative Writing, and Social Justice Master’s Degree program at Our Lady of the Lake University in San Antonio. There she made an intense and lasting impact on the OLLU community. Despite the rigorous demands of her classes, Shimi maintained an active performance schedule, only slightly diminished by the pandemic when she moved many of her appearances online, including a Sunday night pole rant titled “Angry Orchid’s Week in Review” that included pole performance, cocktail drinking, and a reverse strip tease.

Shimi was a life-long pedestrian and often shared her stories of the hazards of bus travel, including vehicles, lecherous men, and unmasked riders. Her life was abruptly ended on Dec. 2, 2020, when she was hit by a car as she crossed from a bus stop to the studio where she taught.

It is fitting that her name of origin includes the Sanskrit word Lakshmi, in testament to the supreme Hindi Goddess. Like Shimi, the goddess Lakshmi fills many roles and has many names – “the goddess of wealth,”“the goddess of teaching,”“the goddess who leads one to their goals,”“the supreme one,”“the flame-like one” – all of them fit our Shimi. One of the many variants of Lakshmi is “Kamala” – a coincidence that no doubt pleased Shimi, as she saw her namesake ascendant to the position of Vice-President Elect.

She is survived by her husband Oscar, her father Subramaniam, her brother Neeven, sister-in-law Lynette, three nieces, and her beloved dog, Tasha Yar. Shimi leaves behind a powerful legacy of advocacy, passion, and love of life. We are left with a gaping hole in our hearts, but her light has not been extinguished.

It will forever shine brightly in all of us touched by Shimi.