Yolanda Huron, Dedicated to Helping the Elderly at San Antonio State Hosital for 41 Years, Dies at 63 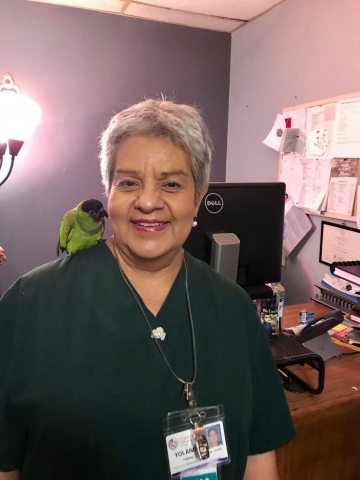 Yolanda Huron loved her job at the San Antonio State Hospital helping geriatric patients, but she also loved her co-workers so much that she enjoyed spoiling them, said her daughter, Roxanne Huron.

“She was always feeding them,” Roxanne said. “She would find recipes online and make enchiladas, casseroles and all kinds of food for them. They were her family. We used to joke with her and say, ‘Hey, mom, what about us?’ ”

Born on July 5, 1957, Yolanda was one of eight siblings and grew up on the South Side. After graduating from Harlandale High School in 1975, she briefly worked for Wilford Hall Medical Center before starting a decades long career in 1979 at the San Antonio State Hospital where she worked for 41 years as a psychiatric nursing assistant.

“She said she had always wanted to work there. She had a passion for helping other people,” Roxanne said.

When she wasn’t working, Yolanda volunteered for 20 years with Child Advocates San Antonio, a nonprofit that provides court-appointed volunteer advocates to serve as a voice for abused and neglected children and youth in the welfare system. “She was always trying to give back. She spent time with the kids and took them out to eat or to visit their siblings.”

Marina Gonzales, president & CEO of CASA, said, “Yolanda was a caring and compassionate volunteer for CASA for many years. She was very dedicated to improving the lives of our foster youth, and she will be missed.”

Her daughter said her mom also liked to shop online and spend time with friends and family. Yolanda also was active with her church, Mission San Juan Capistrano, and taught CCD for many years.

About a week before her death, Yolanda became fatigued and began sleeping a lot, her daughter said. She eventually developed pneumonia and died at Methodist Hospital Metropolitan.

Yolanda was buried July 8, 2020 at Mission Park South. She was preceded in death by a son, Ricardo Hurado Jr. who died in 2005. Survivors include her husband, Richard Huron, and her children, Roxanne Huron and Roy Huron; sisters Hilda Arredondo, Sylvia Sanchez and Norma Valadez; brothers Henry Arredondo, Richard Arredondo and Roger Arredondo.